The Department of Primary Industry and Resources (DPIR) recently facilitated the delivery of workshops to Central Australian producers, improving stockmanship practices, knowledge about self herding principles and wild dog management in the region.

A stress free stockmanship course was hosted at Lyndavale  station in October, and a self herding and wild dog management workshop and  discussion exercise took place at Mount Riddock Station. The objectives of the  workshops were to:

All three sessions generated awareness and discussion around  best practice methods, and complex issues facing producers in the region. 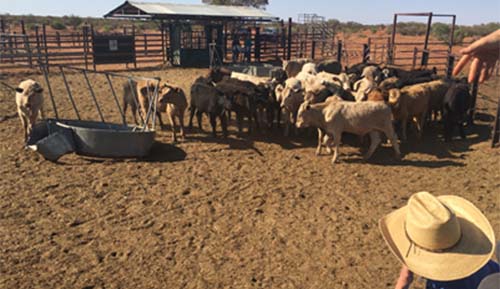 Above: After an hour of ‘active de-stressing’ in the yards, the cattle started to look to the handlers for cues on what to do next.

Bruce Maynard, a producer and innovator from Narromine in  NSW delivered the two day stress free stockmanship course to eight participants  at Lyndavale Station. He introduced participants to animal behaviour theory  before they were taken to the yards for the practical component.

“When we first got into the yards, the cattle were quite  scared of us – so Bruce showed us how to actively de-stress them. He worked one  on one with each person, getting us used to the techniques. The cattle became  calmer, and then actively started looking to us for signals on what to do,”  said Meg Humphrys, DPIR Pastoral Extension Officer.

“We learnt change can be scary for animals so spending an  hour with them in the yards when they are first trapped in them can make a huge  difference to how concerned they are about being in there. This makes the  process much easier when you’re asking them to move through the gates, race and  loading ramp without being stressed and removes the need to use cattle  prodders.”

“When the cattle are in the yards or in the truck that is when  they are most likely to lose condition which is the time when you least want  them too as they are on the way to market. You are investing in the cattle’s  health as well as your pocket by spending that time de-stressing them.  Production-wise it will improve profits in the long term not to have stressed  animals,” Humphrys added.

The group discussed the potential development of an induction  package for Central Australian producers, with video footage demonstrating de-stressing  techniques.

Self herding at Mount Riddock 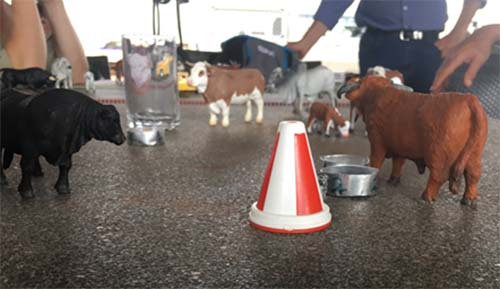 Above: Figurine models were used to show self herding techniques and engage the audience.

Following a successful self herding producer workshop in  August, Bruce Maynard returned to Central Australia to deliver a workshop at  Mount Riddock to five participants.

Self herding is a livestock  management approach that uses positive reinforcement to influence grazing  behaviour and encourage cattle to move into underutilised areas of paddocks. It  also has many other positive applications.

Maynard showed an  introductory video, and talked about self herding projects currently being  conducted across Northern Australia. He emphasised how cattle and humans alike  tend to retreat to familiar (safe) behaviour when faced with challenging  situations – but it’s important to turn this behaviour on its head and teach  animals to diversify when the going is tough. This is applicable to all situations  where animals may become stressed – such as dry times, adapting to an  unfamiliar location or being transported.

Animal movement is dependent  on a range of factors, not just food and water – which is often disregarded.  Maynard reminded participants it’s important to keep older animals and their experienced  learned habits with a younger group to ensure continuity in animal behaviour.

Maynard introduced  participants to the Maynard and Revell self herding guide, and demonstrated  self herding with figurine animals. The workshop provided an opportunity for  producers to discuss why certain management practices are used, for example one  participant raised how observation in cattle management is often forgotten in  the rush to get quick when yarding up cattle.

Meg Humphrys hosted the wild  dog management workshop at Mount Riddock. The expert guests were John Tyne,  Wildlife Ranger with the Parks and Wildlife Commission of the Northern  Territory, Will Dobbie from the Department of Environment and Natural Resources  and Bruce Maynard.

Wild dog attacks on  livestock, especially at calving time, have significant economic and animal  welfare impacts on the pastoral industry. It is estimated that 3.8 percent of  calf loss in the Northern Territory (NT) can be attributed to wild dogs. These  issues are especially magnified in dry times when where are more pressures on  cattle.

Will Dobbie conducted a wild  dog survey across the NT looking out how big the issue was perceived amongst landholders.  He presented the findings to the group to get their thoughts on what was found  in the different regions.

John Tyne spoke about his  role in helping with the Fox Project that was conducted by DENR which looked at  the use of injectors to have a more targets affect to 1080 baiting and how that  might relate to wild dog control. He also spoke briefly about the role Parks  and Wildlife had in wild dog management in the past and asked how the current  arrangement in which landholders do their own baiting is working for them  compared how it worked in the past with Parks doing the baiting.

Bruce Maynard also attended  the session, raising the possibility of using ‘dog deceivers’ – meat that has not  been baited so dogs don’t begin associate easily accessible meat with sickness.  This was something many producers had not considered, and a possibility for  those who had exhausted their bait allocations to prime the dogs for when their  yearly allocation is renewed.

“It was interesting to talk about wild dogs from so many  perspectives as it is such a diverse issue. Will Dobbie is hoping to write up  the results from the project he did over the last few years to consolidate the  information but summarising the ranges of perspective will be difficult,” Meg  Humphrys said.

The department encourages industry uptake of best practice  knowledge and technology to improve the profitability and sustainability of  primary industries in the NT.