Botulism in the Northern Territory

Botulism still causes significant stock losses in the NT despite the rigorous vaccination programs adhered to by most cattle stations.

In 2015 a survey was carried out on 19 properties in the Northern Territory to determine what percent of protective antibodies there were in the cattle after vaccination. A study by Kelly and Fordyce (2014), ‘Analysis of serological responses by cattle against C. botulinum following vaccination’, confirmed that a blood antibody level greater than 0.45 was protective against a challenge of botulinum toxin. Using this parameter of 0.45 serological ELISA units as the acceptable vaccination standard affording protection, it was found that the range of protection in animals measured in the 19 vaccinated herds varied from 0% to 100% with an average of only 67% of the animals being covered. This means that over 30% of the supposedly vaccinated animals failed to have a protective titre against botulism.

Some contributing factors that could prevent adequate protective antibody levels after a vaccination program are:

One station in the Northern Territory saw a significant improvement from 82%-100% (the best overall result recorded in the trial) by taking precautions in the following areas:

Botulism in cattle is caused by two toxins, C and D, which are produced by the bacterium Clostridium botulinum. Allwarm-blooded animals can be affected by one or more of the seven toxins produced by this gram-positive anaerobic bacterium.

Cattle that have not been vaccinated, and have not been supplemented with phosphorous and protein will seek out and chew bones and decaying carcases. These are the most common sources of contamination. Although both male and female cattle are equally susceptible to the toxin, botulism is more commonly seen in breeding cattle. This is because breeders generally experience larger demands for phosphorous and protein in their diet due to lactation stress.

In botulism, normal nervous function is interfered with resulting in an ascending paralysis, and cattle are one of the most susceptible species. The first observed signs may be depression, muscular weakness and incoordination. The incoordination will usually begin in the hind legs, making the beast stumble and knuckle over and go down. Once down, the animal appears very weak and has great difficulty in rising. Paralysis of the tongue and throat is often seen, causing the animal to refuse to drink, resulting in dehydration. This paralysis eventually affects the muscles involved in breathing, causing respiratory failure. Semicircular marks on the ground resulting from the uncontrolled paddling movement of the legs can sometimes be observed around the carcase.

The diagnosis of botulism is largely based on clinical signs suggestive of the disease as there are no laboratory tests of any value. These clinical signs can vary dramatically depending on the amount of toxin ingested and any pre-existing immunity the animals might have.

In an affected animal the tongue is usually unable to be retracted and the animal may drop cud and drool saliva, however this can also occur in animals with three day sickness and other disease. Bones or maggots may be found in the reticulum and indicate bone chewing or ‘pica’. The omasum is usually hard, enlarged and dry (‘dry bible’) due to dehydration.

Often the field diagnosis of botulism as the cause of animal losses has been met with some scepticism especially when there is a fairly rigid vaccination program in place. The extent to which the vaccination programs were providing a protective level of antibodies against the disease was not known, however.

There is no treatment for the affected cattle. Vaccination is not effective for cattle once the animals are showing signs of having botulism as it takes more than five weeks after vaccination to produce protective antibodies. 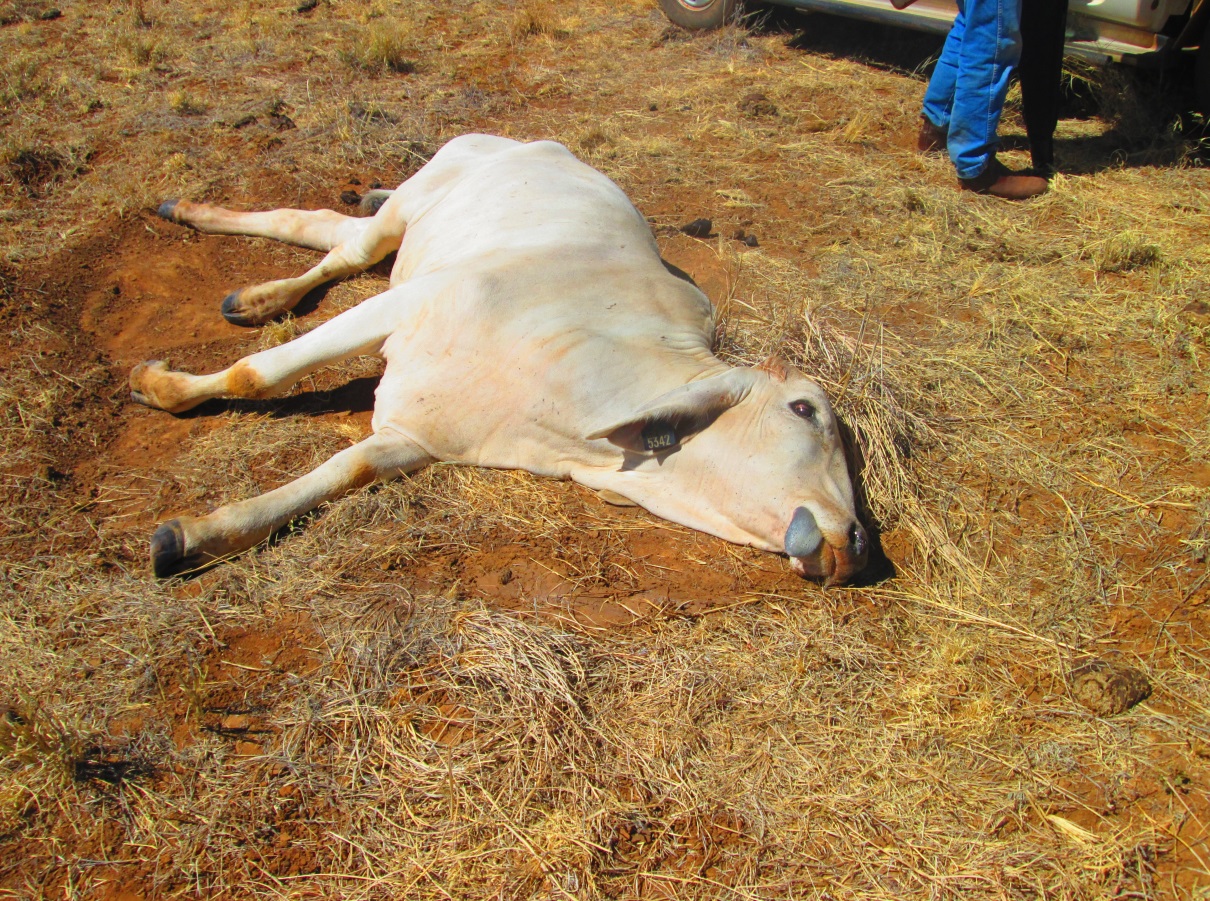