Bovine ephemeral fever (BEF), also known as Three Day, is a disease found in cattle. BEF is spread by flying insects and is most commonly seen during the wet season in the Northern Territory. Cattle that have been exposed to the disease will usually build up immunity. Young cattle or cattle not previously exposed to BEF are more likely to be affected by the disease.

A manager on a flood plain property in Arnhem Land noticed approximately 30 head of two-year-old cattle from a mob of 450 showing signs of lameness, lack of coordination and lying down during the muster.

Samples taken from two of the affected animals by DPIR regional veterinarians showed no abnormalities. Although unseasonably early, laboratory tests on the blood samples taken detected BEF in blood samples from all animals sampled. Early rain resulting in increased insect activity likely contributed to illness and deaths in naïve cattle.

Following castration, station staff noticed a dead steer and a further 12 steers were noticed to have massive swelling in the preputial area (in the front of the genital area). Despite swelling, all steers appeared to be moving and urinating normally. 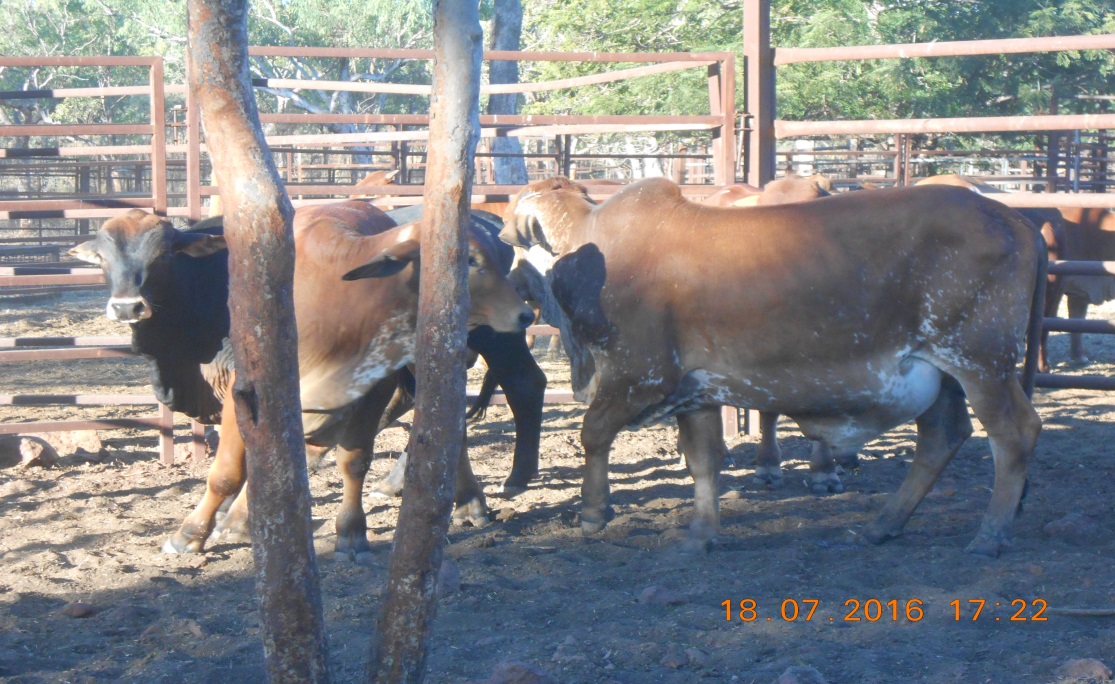 An autopsy on one steer found no remarkable changes in the ureter and urethra. The greater omentum was found to be congested, inflamed and had migrated into the lower pelvic cavity.  There was a hard mass in the prepuce (pizzle) which appeared to be a mass of dead tissue.

The poor hygiene at castration likely contributed to an opportunistic bacterial infection of the castration wound. The 12 steers were given antibiotic therapy, and all recovered rapidly.

Suppurative cholangiohepatitis in a steer

A station manager found an eight-month-old Brahman bull calf lying down, unable to stand and moderately dehydrated. The calf was without a fever, and appeared to be fairly bright.

Tests conducted on the live animal did not reveal significant internal parasites, persistent infection with pestivirus, or evidence of bovine ephemeral fever. Mild muscle damage was found, likely due to the calf being unable to stand. The calf received supportive care for a week without improvement and was then euthanized.

A DPIR regional veterinarian conducted an autopsy on the calf. The most notable of the samples taken was the enlarged haemorrhagic gall bladder containing thickened bile. It was also observed that the liver was enlarged. All other organs appeared to be normal. Laboratory tests found that a bacterial infection had ascended through the bile duct from the intestine through to the gall bladder and on to the portal areas of the liver. In the lab, the bacteria E. coli was grown from the samples collected from the liver, spleen and bile. 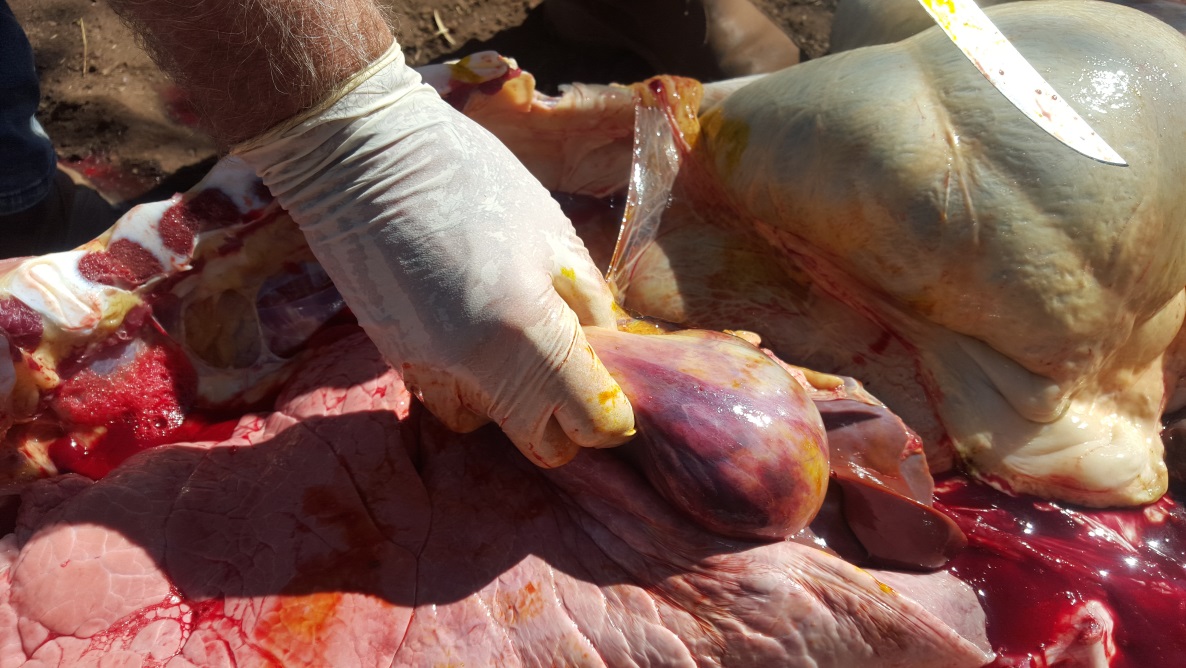 In this case, the final diagnosis was suppurative cholangiohepatitis, which is a blockage of the biliary ducts by bacteria which prevents a suppression of the flow of bile into the intestine.

The sudden death of five chickens out of a flock of 60 was investigated by DPIR regional vets in the Darwin region.

A number of birds in the flock showed signs of sneezing, nasal discharge, swollen faces and ruffled feathers following the introduction of a new bird into the mixed age flock approximately one month previously.

Post mortem and laboratory investigations of the dead birds revealed a moderate to mixed gastrointestinal parasite burden in two juvenile chickens. One adult layer was found to have moderate to severe uveitis (eye inflammation), moderate keratitis (inflamed cornea), mild conjuctivitus and a concurrent yolk peritionitis was diagnosed. A lymphatic neoplasia affecting the lung, kidney, ovary and intestinal serosa was found in another adult layer hen, likely due to infection with lymphoid leucosis. Avian influenza and Newcastle disease virus were ruled out in all birds. Given the varied range of conditions in this case, DPIR veterinarians provided the owner with management and biosecurity advice, and the owner has not reported any further losses.

Lead toxicity in a dog

An eight-year-old dog was examined by a private veterinarian after it began having acute seizures, along with a rapid heart rate and hyperthermia. The dog failed to improve with treatment and was euthanased. The dog was sent to to Berrimah Veterinary Laboratories (BVL) for post-mortem.

The post-mortem showed that the dog was in good condition. There was evidence of diarrhoea, along with water and mucus mixed with small stones and plant material. BVL staff examined a wide range of tissues, including the brain; however, no significant findings were made.

Further discussion with the dog owner revealed that two other dogs had showed similar symptoms and died over the previous couple of months. The owners reported that the dogs had access to an area on the property where people had been making lead sinkers by the smelting of old car batteries.

Toxicology results showed that the liver had a markedly elevated level of lead (110 umol/kg wet wt., ref <2 umol/kg), confirming a diagnosis of lead toxicity in the dog.

Pregnancy toxaemia the cause of sudden death in mustered cattle

Department of Primary Industry and Resources veterinary officers received a call regarding sudden deaths in a mob of 50 previously unhandled Brahman cross cattle that had been mustered by a helicopter. Staff held the cattle for a time before trucking them to the station yards for processing. Several of the heifers displayed signs of panting, agitation and varying degrees of lameness and lack of control over body movements. Three heifers died over the following two days.

Post-mortem examination revealed that one of the heifers was approximately 30 months old, in moderate to poor body condition. There was extensive carcase bruising and bones were unusually brittle, the liver was diffusely pale, gall bladder enlarged and the omasum was dry and hard. The heifer was approximately seven months pregnant with a bull calf.

Laboratory tests showed that the heifer had elevated muscle enzymes and raised ketone levels and a diagnosis of pregnancy toxaemia was made.

Pregnancy toxaemia, or fatty liver disease, occurs when the body begins breaking down fat for energy and produces ketones. A build-up of ketones in the bloodstream is toxic to the brain, which is fatal and difficult to treat once it has progressed. Post-mortem will often show a characteristic enlarged, soft, pale yellow liver and a later-term pregnancy. 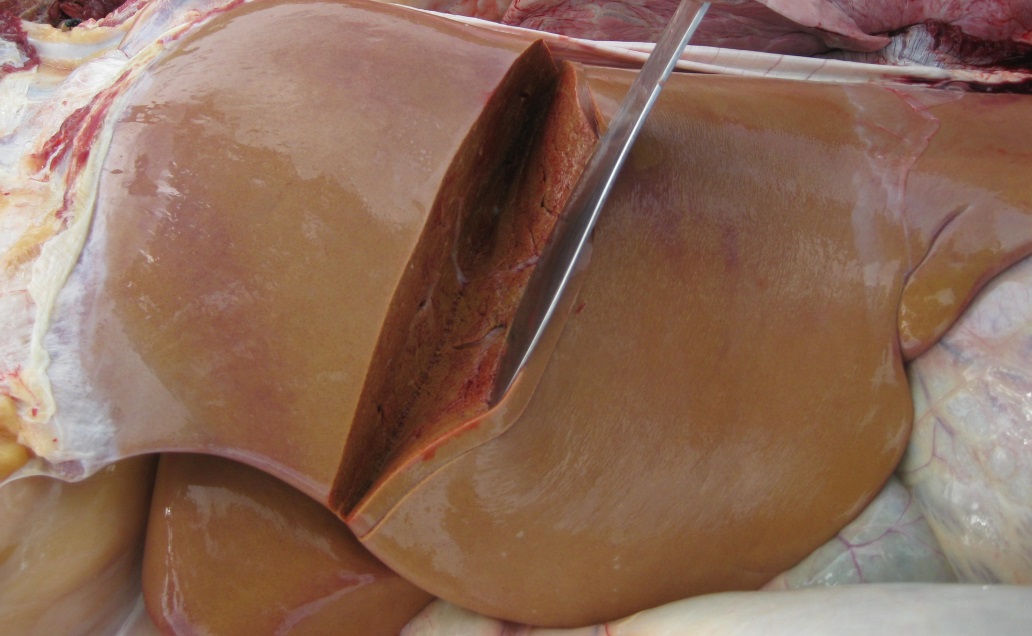 Pregnancy toxaemia occurs most commonly in fat pregnant cows when feed is limited or of poor quality. Stress, such as transport and yarding and time off feed and water, can also induce the disease, and a number of cows can be affected at the same time. While it can be difficult to identify late-pregnant cattle in a muster situation, stress should be minimised where possible and good quality feed should be available at the destination. When trucking cattle in late pregnancy, avoid transporting cattle which are due to calve within four weeks (unless the journey is less than four hours and directly to another property), and minimise time off water.

A one-year-old crossbreed dog was taken to a private veterinarian after the owners noticed it had been fitting and acting unusually for the past day. The veterinarian found that the dog was hyper-sensitive to light and movement, had stiff limbs and a head tilt. Differential diagnoses included tetanus and rabies. The dog was euthanased after it failed to improve with treatment.

Post-mortem examination found the dog was underweight and dehydrated, with pale gums.

Laboratory testing showed there was mild inflammation of the brain. There was also inflammation of the lungs and the tissue of the paw pads, which suggests the dog may have inhaled or had contact with of some kind of irritant. Severe bleeding in the gastrointestinal tract may have been due to a blood clotting disorder.

A number of tests were conducted at the Australian Animal Health Laboratories and Australian bat lyssavirus, rabies and morbillivirus (canine distemper) were excluded. Tests were also run to check for lead, metaldehyde and snake venom levels, but levels did not provide a diagnosis. The signs seen in this dog are consistent with exposure to a toxin which could not be confirmed.

A producer called Department of Primary Industry and Resources field veterinary officers to have a look at a three-year-old Brahman cross steer on a property just out of Darwin. The steer was apprehensive of people and extremely sensitive to noise and contact. The steer was in a mob of 100 cattle that were not exhibiting any of the same behaviour. The manager of the property also mentioned that the steer was significantly stunted compared with other steers on the property that were of similar age. The steer was euthanized and submitted as a transmissible spongiform encephalopathy (TSE) exclusion case to Berrimah Veterinary Laboratories.

Post-mortem examination found no abnormalities other than the spleen being smaller than expected. Tests proved that the steer was persistently infected with bovine pestivirus.

Bovine pestivirus is endemic in the Northern Territory and if a cow is infected while pregnant, the calf will also become infected. If the pregnancy is not aborted and the calf survives, it will shed the pestivirus for life (which is why they are known as persistently infected or ‘PI’). PI cattle can grow well, but are generally unthrifty with a rough coat compared to other cattle the same age. They are a source of infection for other cattle which have not been exposed to the virus. PIs usually have a reduced life expectancy.

A hobby farm reported the sudden death of 11 birds from a free range mixed poultry flock of 15 birds outside Darwin. There had been no recent management changes or introduction of new birds.

Eight chicken, duck and guinea fowl carcasses of mixed ages and sexes were found in varying degrees of decomposition and covered with maggots. Post-mortem examination showed all birds were in good condition, and four had maggots present in the upper gastrointestinal tract. Internal parasites were found in the faeces and there was no histological evidence of systemic infectious disease. Newcastle disease and avian influenza was excluded in all of the birds and the maggots were not those of the screw worm fly.

Warm, humid weather and rotting vegetable matter favour the grown of the Clostridium botulinum toxin in maggots. The presence of ingested maggots in the birds in this case is highly suggestive of botulism as the cause of disease. Cases of botulism in poultry occur annually during the wet season in the northern part of the Northern Territory. Poultry owners should prevent birds from having access to possible sources of the toxin by removing decaying food scraps, animal carcasses and rotting vegetation.