Veterinary officers Megan Pickering and Elizabeth Stedman from the Livestock Biosecurity Branch, delivered an interactive post mortem and disease investigation workshop for cattle producers in the Katherine Region.  Hosted by the Riggs family at Lakefield Station on a blisteringly hot December day, the 24 participants eagerly engaged in the hands-on experience of sample collection and preservation in the field.

Commencing with a theory session, the workshop covered potential biosecurity threats to Australian pastoral industries, the various mechanisms in place to protect livestock, the response systems and combined government/industry approaches that would be taken in the case of an exotic or emergency animal disease incursion, and the role of the producer in on-farm biosecurity and early disease detection and reporting.  Extreme climatic conditions and extensive grazing practices in northern Australia pose significant challenges to effective disease investigation options, and the option for producers to collect meaningful samples in the early phases of a disease outbreak was welcomed.

Two complete post mortems were then undertaken, where the practical aspects of tissue sampling were discussed around issues such as appropriate sample size, how to recognise normal versus abnormal tissues, tips and tricks on tissue handling to avoid excessive tissue damage or disruption in sample collection, and how to store, pack and dispatch both fresh and preserved tissues from the field.

At the conclusion of the workshop, participants from each station were presented with a sample collection kit.  It is envisaged that such training will encourage and enable producers to confidently collect diagnostically meaningful samples in the early stages of a disease outbreak, which is a key factor in Northern Territory and Australian biosecurity preparedness strategies.

This workshop was funded by the Northern Australia Biosecurity Surveillance project through funding from the Australian Government Agricultural Competitiveness White Paper. The project is a collaboration between the Commonwealth and Queensland, Western Australia and Northern Territory Departments of Agriculture and Animal Health Australia. 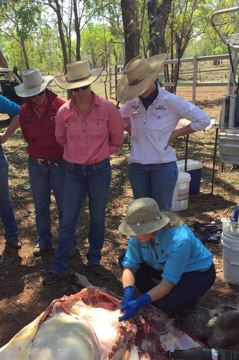