During January to March 2018, 55 livestock disease investigations were conducted to rule out emergency diseases or investigate suspect notifiable diseases across the Northern Territory (NT). Figure 1 shows the number of investigations by species of livestock.

Figure 1. Livestock disease investigations by species for January to March 2018

Botulism in weaner cattle during the wet season

In late January a pastoral property outside of Darwin reported several cattle laying down and lethargic. The cattle were in a paddock of approximately 500 weaners. Despite supportive care, most affected animals did not improve and died within three days. Deaths continued into mid-February, with affected animals found lying down and lethargic. At least 12 head died or were euthanised.

Although the property had previously managed several cases of botulism in their cattle with vaccination, this group of cattle had not been vaccinated. A phosphorus supplement was available and the cattle had been treated for internal and external parasites using a backline treatment. Notably, the weather had been particularly wet in the previous few weeks, with the area receiving over 1000mm of rainfall for January (average of 468mm).

Initial blood and faecal sampling of an affected steer and an affected heifer showed a possible bacterial infection and mild muscle damage in both animals. The faecal egg count was within normal limits, suggesting internal parasites were not the cause. Bovine Ephemeral Fever (BEF) and polymerase chain reaction (PCR) testing for BEF virus was negative, and the BEF serological test for antibodies was positive in both animals. This indicates previous exposure, but not current infection with BEF virus. Weaner cattle within the National Arbovirus Monitoring Program activity zone commonly have antibodies against the BEF virus.

The Darwin Regional Veterinary Officer attended the property and performed an autopsy on a euthanised steer and a heifer which had died 12 hours previously. The heifer was one year old and in good condition. A fragment of bone was found in the omasum (third stomach), and a full range of samples were collected. While there was marked decomposition of the tissues of the heifer, no obvious abnormalities were observed on histology. The steer was two years old and in good condition. It had been sitting for 24 hours, was bright in demeanour and there was no evidence of tongue paralysis. Similarly, fragments of bone were found in the rumen during autopsy. This steer also displayed antibodies to BEF, though tests of splenic tissue from the heifer and blood from the steer indicated that the exposure was not recent.

Based on a combination of the clinical signs, history of botulism on the property, lack of vaccination of the affected animals, the presence of bone fragments in the gastrointestinal tract and no significant findings on microscopic histology, a diagnosis of botulism was made.  Botulism toxicity is very difficult to prove conclusively but it is a major risk to NT cattle.

Given the recent wet weather and large wildlife population in the area (agile wallabies), it is likely the unvaccinated weaner cattle had access to cattle or wildlife carcases with the botulinum toxin produced by the bacterium, Clostridium botulinum. The bacteria can multiply rapidly in carcases with the warm and moist conditions of the Top End wet season and produce spores that can survive in the environment for years as a future disease threat. Despite mineral supplementation cattle will often persist in carcase consumption exposing themselves to a major source of toxin.

There is no treatment for botulism in cattle and most affected cattle are euthanised or die of respiratory failure. In this case, advice was given to immediately vaccinate the remaining cattle with botulism vaccine and to ensure that carcases were removed from paddocks and buried or burnt where possible. Mortalities on the property ceased two weeks after the cattle were vaccinated which is possible further proof of botulism. The property has now implemented a vaccination program for future young stock.

In late March, after several weeks of particularly wet and humid weather, a hobby farmer outside Darwin reported acute neurological disease in a litter of 3 month old grower pigs. The pigs were normal when fed in the evening, but the next morning 6 out of 10 young pigs were found lying on their sides and paddling with their legs. The six adult pigs in the same and neighbouring pens were unaffected. There had been no recent management changes on the property.

On examination, the affected pigs were somewhat aware of their surroundings, and were able to weakly struggle when restrained, but were unable to get up.  They exhibited severe whole body tremors and appeared particularly sensitive to noise and movement. Two affected pigs were euthanised and autopsy was performed. Both piglets were in good body condition, with stomachs full of mixed material consisting of foetid brown mashed material including various vegetables and fine roots. Remaining intestinal tracts of both pigs were full of normal contents. The pigs were normally hydrated, with abundant urine in their bladders. 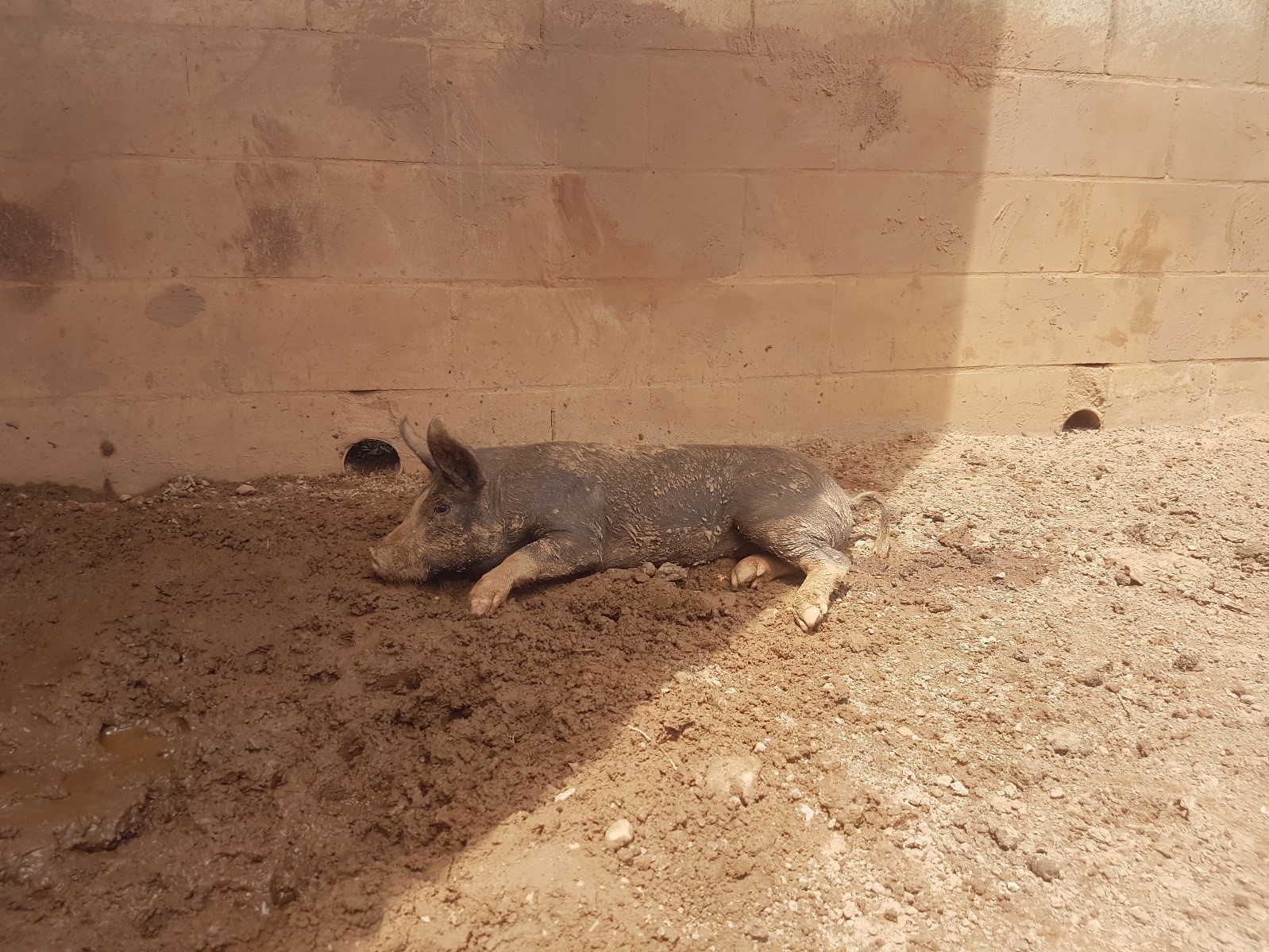 Blood chemistry analysis did not show any significant changes, with electrolytes, minerals and kidney and liver parameters within normal limits. Both grower pigs showed an increase in the number of white blood cells that respond to bacterial infections. On histological examination, a mild to moderate inflammation of the brain was observed in both pigs. A culture of swabs taken from the brainstem at necropsy from both pigs was negative, including in culture media specific for Haemophilus parasuis (Glässers Disease – which can cause convulsions), and there were no systemic lesions suggestive of septicaemia. Infection with exotic Aujesky’s Disease was excluded via testing of multiple tissue samples at the Australian Animal Health Laboratory in Geelong, Victoria.

On questioning, the owner reported that they had ceased feeding the piglets a weaner pellet ration a few weeks previously, as the stored food had become mouldy. The current ration for the piglets and adults had consisted of scrap food sourced from a local Foodbank, which was collected every three days and stored in a cool room on the property. These scraps consisted of a various types of fruit, vegetables and bread, and given the recent high humidity, it is likely some of the scraps were mouldy.  This feed is permitted and is not defined as ‘swill’.

Based on clinical history, histological evidence and access to feed scraps which were likely mouldy, a diagnosis of toxicity due to tremorgenic mycotoxin was made. Mycotoxins are toxic substances produced by a fungus. Tremorgens are mycotoxins which can produce tremors or seizures in animals which consume toxic amounts of contaminated foodstuff.

Advice was given to immediately discard the remaining food scraps and treat the affected pigs with supportive therapy. 24 hours after the first signs were observed, the owner was surprised to find the remaining 4 affected pigs had made a complete recovery; this is consistent with exposure to a sub-lethal dose of tremorgenic mycotoxin. The owner has since commenced feeding a commercial grower pig pellet ration and there have been no further issues on the property.

Feeding of swill - food scraps which contain meat, meat products or anything that has been in contact with meat is not permitted and can cause extoic diseases in pigs, which may also infect other livestock. Feeding swill to pigs is believed to have caused the outbreak of Foot-and-Mouth (FMD) disease in the UK in 2001.

In addition to FMD; Classical and African Swine Fever and Transmissible Gastroenteritis can be carried and transmitted by feeding swill to pigs.

If you notice any unusual symptoms in your pigs, contact your Regional Biosecurity Office to arrange investigation or report it to the Emergency Animal Disease Watch Hotline 1800 675 888.