The biosecurity continuum: how livestock industries are protected from exotic disease

Because we are an island nation, Australia is able to remain free from many of the serious animal diseases found elsewhere in the world. This status is important to our ability to export live animals and their products, and is protected through high quality animal health surveillance activity, and stringent quarantine laws. The threat posed by an African swine fever (ASF) outbreak to the Australian pork industry, is a biosecurity issue that is currently under the spotlight. This article aims to outline the various activities that contribute to maintaining biosecurity for livestock producers in the Northern Territory and across Australia.

At the Territory level, biosecurity is maintained through government and industry participation in all of the onshore areas shown in Figure 1: 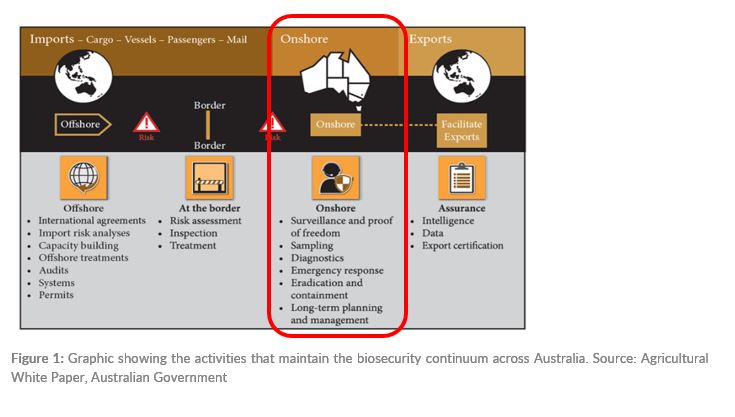 Surveillance and monitoring activities may be passive or active. Active or targeted surveillance involves collection of data for a specific purpose. In the Northern Territory (NT), DPIR Livestock Biosecurity Branch (LBB) staff are involved in a range of active surveillance activities, for national programs that target significant exotic diseases, including:

These activities enable the NT to provide certification for live export, by allowing us to have scientifically defensible evidence to claim freedom from disease, as well as identifying new markets because of disease-free status.

Passive surveillance activities occur when we gather information for more general investigation, such as post mortem examination and diagnostics, in cases of unexpected stock deaths or disease. These activities help us to identify diseases that are new to Australia, so that a rapid response occurs. Quick control of an exotic disease will minimise disruptions to productivity caused by stock movement or export restrictions.

Staff within the Livestock Biosecurity Branch are engaged in regulatory activity, surveillance and emergency responses preparedness, such as dealing with exotic disease or a natural disaster, eradication and containment of disease, and long-term planning. This work includes:

There are other border surveillance and risk-mitigation activities in Australia performed by agencies such as:

In all states and territories, the local Department of Primary Industry (or equivalent) is responsible for planning and preparedness, in the event that an exotic disease reaches our producers, or a feral target species, which may threaten primary producers. With the high level of threat to the Australian pork industry, NT staff are currently engaged in specific disease response preparations for ASF.  These activities include:

Ultimately, biosecurity is everyone’s business.  The quarantining of Australia to maintain our current level of disease containment is achieved through efforts at all levels of government, as well as personal awareness and accountability.  It should, however, be recognised that although ASF is of current concern, continual vigilance is necessary to maintain disease freedom from a range of animal health threats such as foot and mouth disease, equine influenza or bird flu. The biosecurity continuum begins at the national border and continues to the property, where all producers should have a biosecurity plan.   Information and resources on how to develop a personalised plan can be found at: https://www.farmbiosecurity.com.au/, or contact your NT Government Livestock Biosecurity officer for assistance and advice.