Burning the bush at Kidman Springs

Despite an average wet season (512mm) there was plenty of grass to burn on our 27 year old fire experiment at Kidman Springs. This year all the different fire treatments were due to be burnt; all the two yearly, four yearly and six yearly burn plots, 12 in June for the early burn and 12 in October for the late burn plots.

The aim of this long term experiment is to test the effects of burning in different seasons (early in June vs. late in October) and with different intervals between fires (two vs. four vs. six yearly) compared to unburnt comparisons on pasture health and woody cover. The experiment is now providing insights into the effects of different fire regimes on carbon storage and a new study by the University of Queensland is looking at the effects of fire on living soil biocrusts and whether fire can be managed to increase soil fertility in the grazed tropical savannas.

More information about the experiment and its design can be found at the Future Beef website. 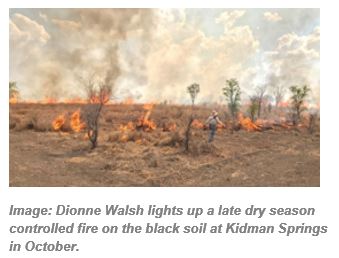 The red soil fires tend to be less intense than the black soil fires due to lower and more patchy ground cover and fuel loads. 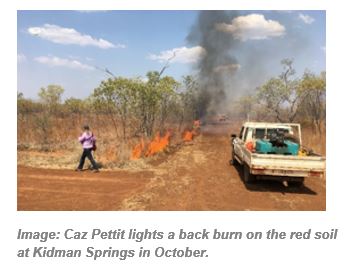 Many larger mature trees succumbed in the days after the burn. Generally fires affect the smallest and largest woody plants the most. 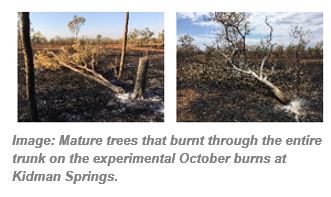 You can see our efforts from space – the black coloured plots were burnt in October this year, the grey plots burnt in June this year and the brown plots are the unburnt controls. Each small square is about 160m x 160m in area. 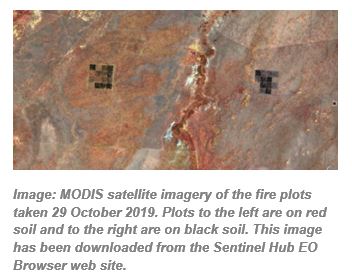 This year researchers from The University of Queensland have been collecting soil samples before and after the fires to assess the effects of fire on soil biocrusts and soil fertility. In October they measured soil temperatures as the fires moved across the plots and set up soil moisture probes to measure soil moisture over the coming wet season as well as trail cameras to photograph the fire plots as they regrow after fire. They hope to link changes on the ground to the changes measured via satellite imagery, so they can upscale their results to the landscape level. 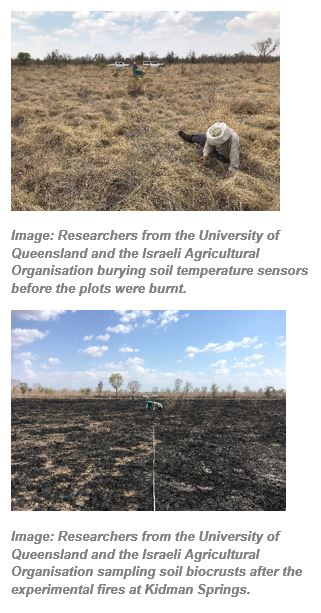