Calf loss is a major source of lost income for northern beef producers, and it is estimated that neonatal calf loss costs north Australian cattle producers in excess of $53M annually. Reducing calf loss has the potential to improve weaning rates and profitability for northern cattle producers. In northern Australia, calf loss exceeding 30 per cent in first calving heifers and 15 per cent in cows is not uncommon; halving these losses would provide significant benefits.

It has been historically difficult to investigate and reduce calf loss, as calving females are difficult to find in large paddocks, and close observation during calving disturbs animals and alters behaviour (and in some cases may even contribute to mismothering and calf loss). In addition, calf carcasses are difficult to find under extensive conditions and so in many cases it has not been possible to conduct autopsies to determine the cause of calf deaths. If a system could be developed to remotely monitor calving in extensive conditions then it would be a game changer for research into calf loss in northern Australia.

The ability to be able to monitor calving remotely and locate calf carcasses for research in extensive situations will be especially useful for research into the effect of paddock size on calf loss. It is suspected that the incidence of calf loss is increased when calving occurs a long way from water points in large paddocks and that reducing paddock size may reduce calf loss rates. However there is currently little scientific evidence for this, and so it is difficult to justify spending large amounts of money on infrastructure without proof that it will reduce calf loss.

Researchers at the University of Florida (UF) have developed a system to remotely monitor calf loss. The Calf-Watch project aims to collaborate with the UF researchers to adapt their system for use in northern Australia and to use it to investigate the causes of calf loss. The systems developed in this project are expected to revolutionise research into calf loss in northern Australia. They will enable the time and location of calving to be recorded remotely so that researchers will be better able to locate cow/calf pairs shortly after calving for observation and also collect dead calves in a timely manner to conduct autopsies. Ultimately this research has the potential to reduce calf loss and improve incomes for northern beef producers.

The UF researchers have been using birth sensors which are placed in the birth canal of pregnant cows up to four months prior to calving. When the cow commences calving, the birth sensor is expelled and the change in temperature causes it to start emitting a signal that is picked up by an antenna mounted on a tower in the paddock. The signal then goes through a gateway on the tower to the internet and ultimately results in researchers being sent a notification that the cow has calved. The researchers can then locate the calving site and record observations. They also tag newborn calves with very high frequency (VHF) tracking tags which contain accelerometers that allow them to locate calves when they die (stop moving). This system has been working well in Florida but there were challenges that had to be overcome for it to be able to be used in extensive north Australian conditions.

Some of the problems that had to be overcome

Another challenge was to design towers that would be able to work effectively in the harsh NT environment (i.e. be able to withstand the heat, humidity, dust, rain, insects, dingoes, cockatoos etc.) and have an increased range. We came up with a design that was durable, cost effective and can pick up signals from within a 2km radius of the tower. 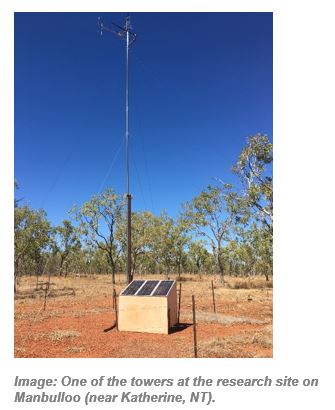 The paddocks in Florida where the research is being conducted are quite small and so they can be covered by one tower. Paddocks in northern Australia are much bigger and so a network of towers is required. The Calf-Watch research is being conducted in a paddock that DPIR lease on Manbulloo station (near Katherine, NT) and it was determined that four towers were required to effectively cover the 22.15 square kilometres paddock.

The research sites in Florida are quite flat, have few trees and the grass is grazed quite low, whereas in the NT paddocks are larger and are often undulating with long grass and tall timber which makes finding calving cows much more difficult. In Florida it is relatively easy to find a cow when a birth alert is received, but it quickly became apparent that some sort of GPS tracking was going to be necessary to find calving cows in the NT. Initially we were told that a new model of birthing sensor was going to be produced with GPS capability, but the company changed their mind after the project commenced and so a suitable GPS tracking system had to be found. After an extensive search only one type of GPS tracking collar could be identified that met our requirements (ability to provide location in real time with pings less than 15 minutes apart, and cost <$300 per cow). 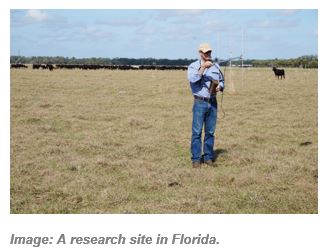 Due to the terrain in the paddocks (lots of rocky ridges and logs hidden in long grass) and the fact that the cows are not as quiet as those in Florida (they are handled a lot less) it was decided that we would not attempt to fit VHS tracking tags to newborn calves for OHS reasons and because it was felt that it might contribute to mismothering.

A pilot study was conducted with 20 cows in a small paddock over the 2018 calving season to test the equipment and iron out any bugs. This was beneficial as we were able to identify a number of issues with the technology and find solutions before scaling the work up at the Manbulloo site over the 2019 calving season. Then in August 2019, birth sensors were inserted into 200 pregnant cows and GPS tracking collars were fitted. The cows began calving on 30/9/19 and will continue until mid December. The birth sensor system is working well and alerts are being received when cows commence calving. An interesting preliminary observation is that most alerts (64 per cent) are being expelled between midday and 7:30pm, although it should be noted that often the calf is not actually born until several hours after the waters break and the sensor is expelled. 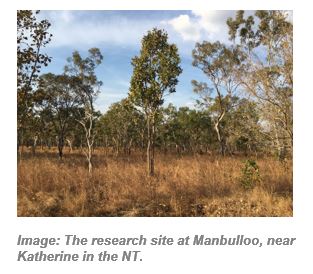 The performance of the GPS tracking collars has been mixed. When the collars have continued to function normally they have been very helpful in locating calving cows. However some collars stopped working after a couple of weeks and in most of these cases it has not been possible to identify the birth site and find the expelled birth sensor. In these cases observations of the cow and calf have been made in the days after calving when they are seen at the water trough. The company that produces the GPS tracking collars is working on solutions to these problems and hopefully the issues can be resolved. The GPS tracking collars also contain accelerometers and it is hoped that it may be possible to use the time of calving identified by the birth sensor alerts to identify movement patterns from the accelerometer data that are characteristic of calving. If this can be done then it should be possible to use accelerometers to identify the time of calving in future.

This project has been challenging as it has involved learning to use new technologies and adapting them for use in challenging conditions. The assistance of our collaborating research partner from UF (Dr Raoul Boughton) has been invaluable in this work. The birth sensor system was not designed for use in such extensive conditions and having 200 cows fitted with GPS tracking collars in a single paddock is thought to be a world first. However, the project is on track to achieve the aims of developing a system to remotely monitor calving in extensive conditions thus providing better ways to study calf loss and ultimately to identify ways to reduce it.