Gamba grass is a perennial tussock grass that was introduced to Australia as an improved pasture species but is now listed as a Weed of National Significance and is spreading throughout northern Australia. It grows rapidly during the wet season and when ungrazed or grazed with set-stocking becomes tall and unpalatable to cattle and other herbivores. As a result other grasses get grazed selectively which can cause gamba grass to dominate.

Gamba grass grows into large tussocks (up to 4 m tall) and the high biomass (up to >20t/ha) compared to native species (<6t/ha) which significantly increases fuel load for fires. It also matures later in the dry season compared to most native species and these changes in timing and quantity of fuel load can result in significantly hotter wildfires than those fuelled by native grass species. This can result in long-term environmental impacts through habitat change. Intense gamba grass fuelled wildfires are also a significant danger to livestock, native animals, people, buildings and property. Gamba grass has already spread through large areas on the northern NT (estimated 10-15,000 km2) including many areas that are difficult to access. Eradication is not likely and chemical control is difficult and expensive. Therefore better ways to manage gamba grass are required. Also, while unmanaged gamba grass is a problem, many cattle graziers view it as a valuable pasture. When gamba grass is grazed with traditional methods (e.g. set stocking) it grows so rapidly that it quickly becomes tall and unpalatable and subsequent growth rates of cattle grazing it have been poor. However there are anecdotal reports that intensive rotational grazing results in better livestock productivity and may also have potential for controlling growth, seed production, spread, and reducing fire hazard, delivering a ‘win/win’ control option for graziers and the environment.

A new trial at Douglas Daly Research Farm (DDRF) began in late 2018 and aims to investigate how to use rotational grazing to control gamba grass whilst achieving good animal production outcomes. The trial aims to keep gamba grass short so that it doesn’t become a fire hazard, or seed prolifically and spread. At the same time keeping it short will keep it palatable and nutritious for cattle and so should increase the cattle production from paddocks infested with gamba grass. Some commercial cattle producers have rotationally grazed gamba grass previously, but there does not seem to be any publically available objective data on cattle performance that other producers can use to decide whether to adopt such a strategy. This trial aims to provide this information.

An area of 180 ha at DDRF that has been infested with gamba grass is being used for this trial. This area used to be one of the worst on the property for cattle production due to the tall rank tussocks of gamba grass that dominated the area. Recently it was subdivided into five smaller paddocks (20-38 ha) to enable rotational grazing. A large mob of 360 cattle rotationally graze the five paddocks with the aim of keeping the grass short and palatable, and then giving it time to recover before grazing it again.

The overall stocking rate over the trial area of 180 ha is two head per ha. However, when the mob of cattle was in one of the small paddocks the grazing density in the paddock at that time ranged from 9.5 to 18.5 head per ha depending on the size of the paddock (see Table 1). The mob of cattle stayed in a paddock for between two and six days depending on how the pasture looked. Some of the paddocks were burnt in November 2018 to try and remove the old rank tussocks before grazing commenced about six weeks later. The wet season began (two inches of rain received within two weeks) at DDRF on 15 November 2019, which was about two weeks later than the average.

Table 1. The paddock sizes and stocking densities in the DDRF Gamba trial.

Results from the first wet season

Rotational grazing successfully kept the gamba grass short and palatable over the 2018/19 wet season and reduced seeding (very few seed heads were visible at the end of April). The growth of cattle was much better than it was previously in this area. Between 18 December 2018 and 14 March 2019 (86 days) the average daily gains of the different classes of cattle grazing the area were: number 17 heifers 0.89 kg/day, number 17 steers 0.71 kg/day, and number 18 entire males 0.58 kg/head per day. As a comparison number 17 steers grazing improved Buffel pasture put on 0.90 kg/day during this time. The average weights of the three classes of animals over the period are shown in Figure 1. Interestingly older animals performed better than younger ones, and this is consistent with anecdotal reports of cattle performance on gamba grass in South Africa (P Conradie pers. comm.). From 18 December 2019 to 9 May 2019 on average the number 17 heifers put on 110 kg, the number 17 males put on 92 kg and the number 18 males put on 78 kg. These figures do not represent the total growth over the wet season as the cattle did not start grazing the gamba grass until 18 December 2018 (about a month after the season broke). It should also be noted that the 2018/19 wet season started about two weeks later than normal and that total rainfall was well below average (980 mm to the end of April), so it will be interesting to see what performance is like in a year with higher rainfall. 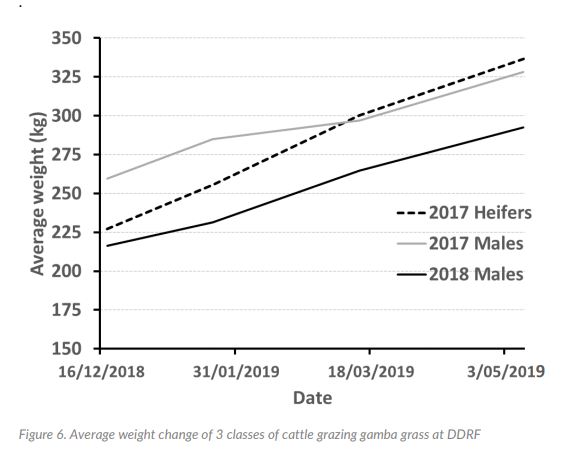 This trial aims to develop and demonstrate a grazing strategy that controls gamba grass (limits its growth and spread) and increases the growth rates of cattle grazing country already infested with gamba grass. If the strategy is shown to be effective and profitable then it is likely to have a high adoption rate among northern cattle producers with gamba grass on their properties. This would be a win/win for the environment and cattle producers.