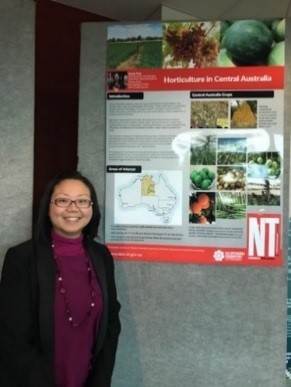 “I have always enjoyed talking to people that do not know that we have a horticultural industry in Central Australia. People just don’t believe it! Sometimes even people who live in Alice Springs find it a surprise!” – Sarah Tsai

I recently presented a poster at the Developing Northern Australia conference in Alice Springs (18-19 June) and the Food Futures Conference in Darwin (2-4 July). This poster puts horticulture in Central Australia in the spotlight. It summarises the horticultural potential of Central Australia: the areas of interest, existing commercial production with room to expand, and crops with great potential in the centre that are still waiting to be developed.

This poster is an extension of the prospectus published by DPIR: Investing in the Horticultural Growth of Central Australia. This prospectus was created with input from several departments of the NT Government as a ‘one stop shop’ booklet to showcase horticultural investment opportunities in the centre from Tennant Creek down to the SA/NT border.

Recently a news article from ABC asked the question: “Why doesn’t the tropical north produce more agriculturally?” Greg Owens, CEO of the NT Farmers Association was quoted “The annual value of production of the horticultural industry was almost nothing in 1981 and has grown to almost a quarter of a billion dollars over the past 37 years”. This shows the time scales necessary for an industry like this to establish and grow.

Both conferences emphasised the development of the mango, melon and Asian vegetables industries in the northern part of the NT. Central Australia, however, has an arid climate suitable for other crops such as table grapes, dates, and bushfoods. These crops have been established and supported through ongoing work of entrepreneurs and the department since the 1980s. As new crop genetics become available, on-ground testing is still needed to evaluate the risks of commercial plantings in the Centre. The demands from consumers are changing, market opportunities are shifting and markets are dynamic and competitive. The challenge will be to exploit the Centre’s unique climatic zone.