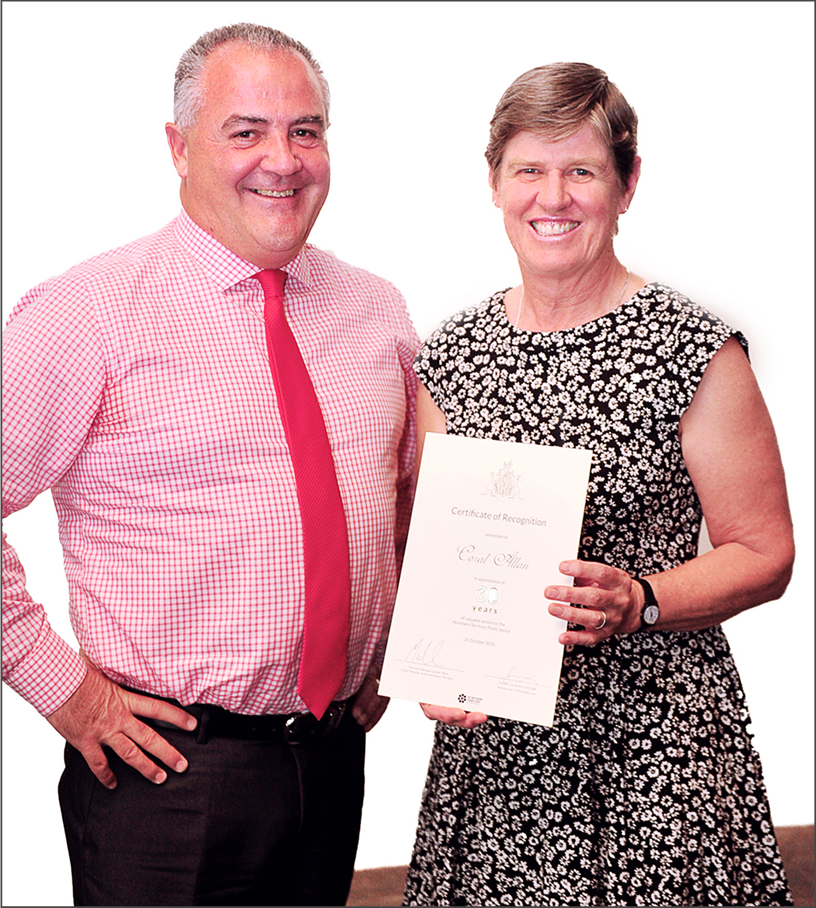 On 31 October, a ceremony was held in Alice Springs for NT public sector employees. Among the 19 employees acknowledged for their service milestones, Coral Allan (Livestock Industries Development Group) was recognised with the 30-year service award.

In 1985, Coral began her public service career with the Conservation Commission (CCNT) in the administration stream of records management. The office was based on Gap Road, which is now home to the Centralian Advocate. At that time it was the Head office for the CCNT. Coral fondly recalls the

vibrancy and excitement of the department, and how much she learned from very experienced officers and other wonderful staff.

Two years later, in 1987, Coral had an opportunity to change departments and positions and join the Department of Primary Production (at AZRI). The department was larger and busier, with laboratories, four veterinarians, nine stock inspectors, as well as rangeland and weeds officers.

In 1989, she returned to Parks and Wildlife (CCNT) in the new Tom Hare building at AZRI. It was a hive of activity with about 60 staff members. Many of the positions are no longer or fall under other departments now. Interestingly though, AZRI is again the head office for Parks and Wildlife.

“Caring for the land has always been a priority and a personal interest,” said Coral. Parks and Wildlife recognised this quality and gave her the opportunity to work as a park ranger at Simpson’s Gap National Park.

In 1994, she returned to DPIF and joined the Rangeland Section. There were eight in the team, which slowly dwindled until only she remained.

“It is hard to believe it has been almost 31 years. It has been an exciting journey, meeting many great people along the way, and learning many skills. Working across a couple of departments has been a very positive experience, one I recommend to others. Learning and synthesising various bits of information makes a great picture in your mind.”

When asked what her most challenging moment was, her eyes twinkled, as she thought a moment.

“I think it may have been to leave a happy working environment and to take on a new role and learn lots of new skills. I’m still learning… perhaps that is what is most important”.

Coral, from all of us at AZRI and the department, congratulations on your milestone, and thank you for your years of service.