Attending the Barkly Climate Workshops (see advertisement in this issue of Barkly Beef) and signing on to receive email updates with the NACP Climate Mate for the Barkly means you get some interesting information on the main climate drivers.  Learning how El Niño, the Southern Oscillation Index (SOI) and the MJO work means that you have a better understanding of how forecasts are made and what that means to your business.

For example: We hear a lot about El Niño during winter, when it often has a strong impact on the southern winter rainfall zones.  While El Niño doesn’t impact the Barkly during the dry season, it is often linked to a late start to the wet season.  Currently, BoM is forecasting a 50% chance of El Niño forming this winter/dry season.  If it does, this might mean a late start to the 2019/2020 wet season.  This is definitely NOT a forecast and it is very important to note that skill for predicting El Niño during Autumn is low, however understanding how some of these climate drivers can affect your region might help when making long term management decisions.

What is the Southern Oscillation Index (SOI)?

The SOI is a measure of the difference in atmospheric pressure between Darwin and Tahiti.  It is an indicator of the formation of El Niño (negative SOI) and La Niña (positive SOI).  Rather than a daily measurement, SOI is described as a trend over 30 days.

What does it mean for rain forecasts?

The map below shows the probability of getting more than the median rainfall for February to April.   It is derived from a forecasting system utilising SOI phases.  This map is produced using a statistical model which looks at data from many past years of records and makes a forecast for this season based on what happened in years where similar conditions were experienced. 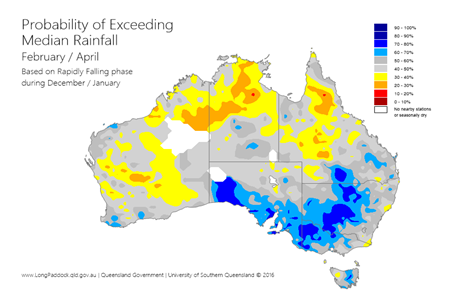 What does it mean for the Barkly?

Where conditions are expected to remain drier than usual and/or feed is likely to be impacted, now is a good time to start considering management options.  Strategies that can be implemented include:

There are some very specific checklists and online tools to help crunch numbers for decision making on the Meat Livestock Australia website.