VegMachine- Looking at the ground from the sky

Wouldn’t it be nice to see how the ground cover has changed on your place over the last 30 years without having to leave your desk? Satellites (Landsat) have been taking pictures of your property for thirty years and the good news is that now you can access these images too, on an easy to use website called VegMachine .

VegMachine lets you look at ground cover of selected areas through time. The areas to look at can either be defined by imported files or you can draw your own area on the website. At its most basic, you can look at maps of cover across your place for a selected date. Options include total ground cover, woody cover (persistent green), as well as decile cover which indicates whether the cover is above or below average compared to the historical record (Figure 5). You can see below the low cover areas still visible from fires in 2015 and 2016 on Connells Lagoon. 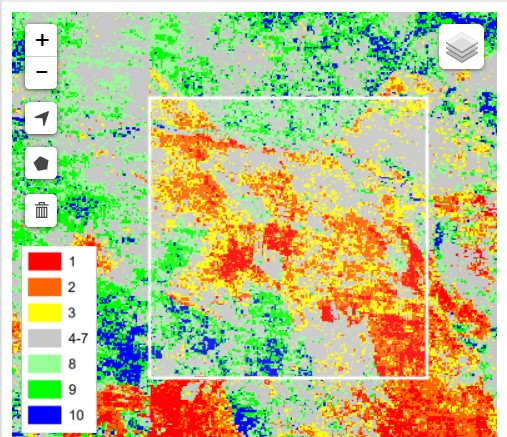 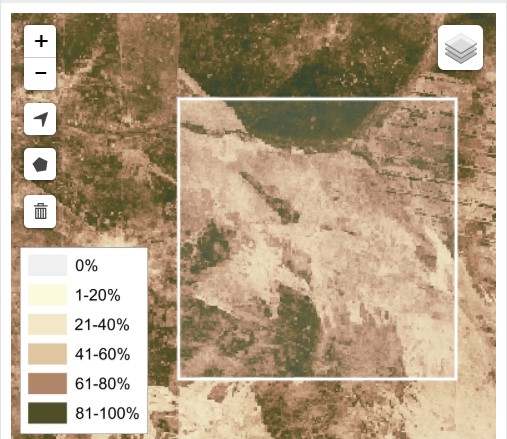 Figure 5: Example of VegMachine decile cover map which shows whether there is more (green to blue) or less (yellow to red) cover than average (left) and total ground cover (right) for Connells Lagoon in the summer of 2017.

But the real strength of VegMachine is the summary of cover through time for different areas using the polygon comparison tool. To demonstrate I have compared the ground cover changes on Connells Lagoon, an ungrazed reserve, to similar pastoral land around it (Figure 6).

The first thing you notice is that the ground cover varies a lot seasonally on the Barkly, both within and between years. There have been some very dry years in the early 1990s, 2008 and 2013 where ground cover fell below 50% on both grazed and ungrazed areas.

The next thing you notice is that the ground cover on Connells Lagoon is usually higher than the grazed areas in the wetter years, presumably because the grass is not removed by cows, but it could also be indicative of better land condition. The exceptions are due to fires. Following fires in late 2011 Connells Lagoon had lower ground cover than the adjacent grazed (but unburnt) areas for the next two years. The most recent fire on Connells Lagoon in 2015 and 2016 kept ground cover at similar levels to adjacent grazed areas until 2017. Cover at both sites had similar trends through time, suggesting that neither site is declining in relation to the other.

Ground cover can also vary with land type. Here the land types compared were a similar Mitchell grass black soil, so we can assume differences between grazed and ungrazed areas are more likely due to management. 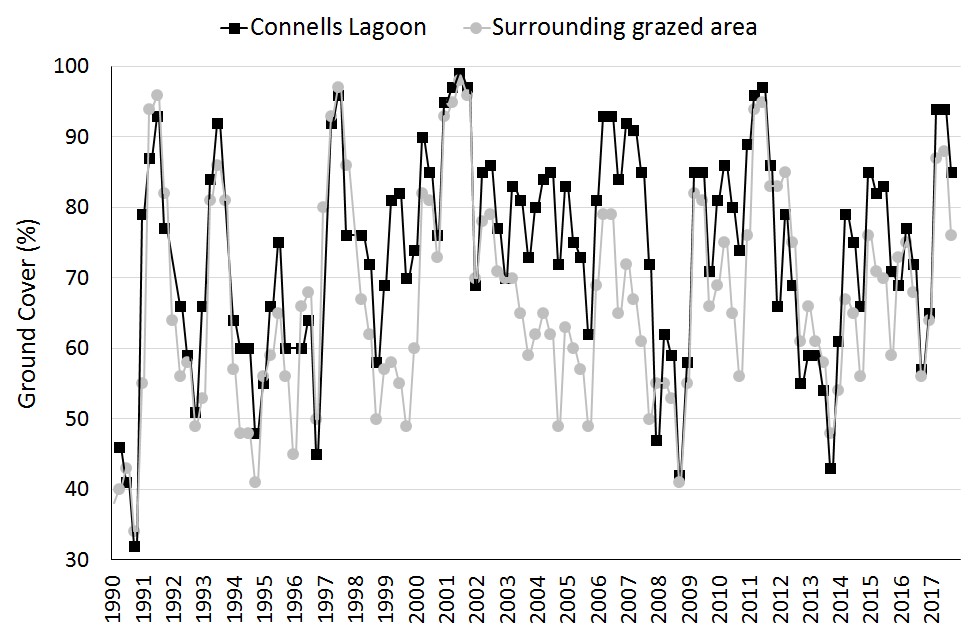 You might want to compare individual paddocks, or similar land types to see how they are tracking through time on your place. Because seasons cause large changes in ground cover, comparing cover trends through time on different areas (e.g. near vs. far from water, grazed vs. ungrazed) can help to distinguish seasonal from management related trends. Knowing what has happened with seasons, fire and grazing management will help you to interpret the possible causes of ground cover changes in different areas. Is ground cover decreasing more through time on some areas? That could mean that stocking rates are too high. Is ground cover increasing more in some areas? That could suggest that management is allowing recovery of pastures.

To see some short example videos of how to use VegMachine see the following links.

View the help button on the VegMachine website to get an excellent easy to follow manual about how to use it.

To get a file of your station boundary to use in VegMachine email dale.jenner@nt.gov.au.

Ground cover protects the soil from erosion. It also reduces soil evaporation, which leaves more water in the soil for growing grass. Good cover gives your land the best chance to capture and keep the rain that falls, so you maximise the growth of your pastures.