Does supplementing cows with phosphorous during pregnancy change weaner performance?

Phosphorus (P) often restricts beef production in northern Australia. When an animal’s P demand cannot be met either from the diet or by mobilising body reserves, dietary intake and growth are typically dramatically reduced. Therefore, it is currently recommended that heifers and cows grazing low P areas be supplemented during late pregnancy and while lactating.

A trial currently running on Victoria River Research Station (also known as Kidman Springs) in the Northern Territory (NT) has reported substantial reproduction and productivity gains from P supplementation. See more at the Future Beef website[1]. Work by Dixon shows that pre-weaning calf growth is also constrained when cows are on low P diets during late pregnancy and lactation. To investigate post-weaning performance, a pen study was recently conducted at the Katherine Research Station, NT measuring the effect of P supplementation with cows during pregnancy and lactation on weaner weight and on weaner growth when fed high and low P content diets.

In September (at eight to10 months of age), after co-grazing native pastures on Kidman Springs, the weaners were relocated to Katherine Research Station and  randomly allocated to either a low P (WnrP-, 0.5 g P/kg DM) or high P (WnrP+, 2.8 g P/kg DM) weaner diet group. Each treatment was replicated three times, with each replicate equal to a pen of two to four animals; the treatment groups were:

The weaners had unlimited access to the experimental pellet for 64 days with their changes in weight measured. Liveweight was recorded after a 15 hour curfew at the start and end of the pen experiment, with interim uncurfewed weights recorded weekly. 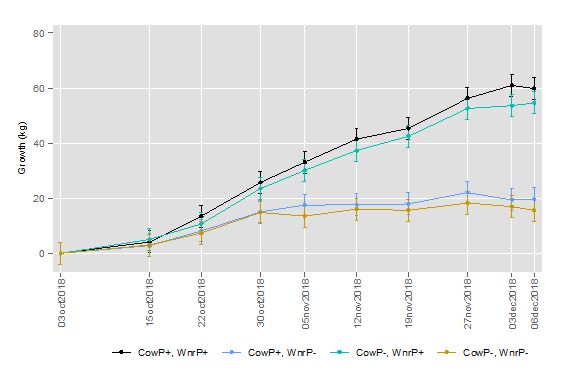 Throughout the trial information on changes in hip height, feed intake and blood samples for measurement of Plasma Inorganic Phosphorus (PiP) have also been collected and plan to be analysed during 2019.

The preliminary results suggest that the P content of cow diet during pregnancy and lactation influenced initial weaner weight, but had little or no effect on post-weaning performance. Weaner diets low in P were shown to significantly affect the post-weaning performance of young cattle. The finding from this study demonstrates the dominating effect of nutrition on weaner performance as well as the persistence of weight losses imposed to calves prior to weaning.