The Savanna is on fire, but often in a good way these days

Attendees from across northern Australia shared their experiences in managing fire at the Savanna Fire Forum held at Charles Darwin University on the 13-14 February. It’s been 13 years since the first fire abatement project started in West Arnhem Land. But, since the development of the savanna burning abatement methodology the increase in land managed to reduce the extent and frequency of late dry season fires has been rapid. There is now a whole industry servicing and implementing savanna burning projects across the north. 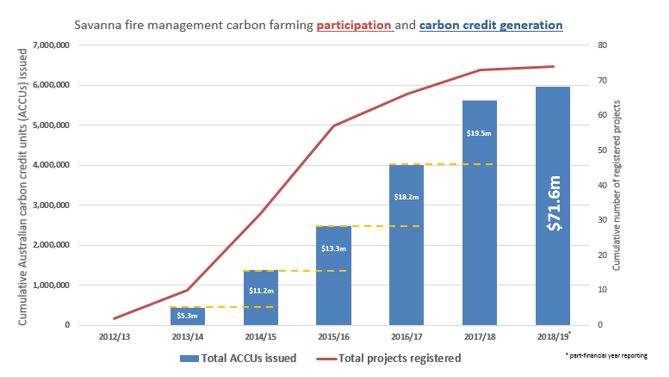 Above: Increase in number of savanna burning projects and carbon credits issued. From Sam Wagstaff’s (Dept of Environment and Energy) presentation at the forum.

Savanna burning is now a major land use activity and income stream on Aboriginal-managed land across northern Australia. There are 25 Aboriginal savanna fire projects run by ranger groups covering 173,000 km2. 68 per cent of these are in the NT. They provide an annual income of $16 million through greenhouse gas emissions avoidance projects.

The common message from ranger groups was that the planning and consultation phase was the most important for fire project success. This involved visiting and meeting with the Traditional Owners across large areas to plan where they wanted to burn, and learning about rightway fire.

The Aboriginal ranger groups felt that although the projects were aimed to reduce greenhouse gas emissions, this was not the main reason they became involved. Rather the cultural, social and ecological benefits of better savanna burning were more important for Aboriginal communities. The savanna burning projects provide a source of income, training, meaningful employment, and opportunity to be on country and exchange knowledge, which is thought to provide additional health benefits for people and country.

Savanna burning projects have typically halved the proportion of the land area that burns late in the dry season, but increased the proportion that burns early in the dry season. Often the total area burnt is not that much less than before the savanna burning project started (typically in the order of 10% of the total area), but fires tend to be cooler, patchier and more interspersed with unburnt areas.

The patchier cool season burns have had good outcomes for critters who need cover to protect them from predators and provide places to live. Monitoring of feral cats in the Kimberley found that they travelled long distances to late dry season burnt areas, avoiding less severely burnt areas. Cats also killed more of the critters they chased in these late hot burnt areas, because the late dry fires are so severe they leave no unburnt patches for critters to hide in.

Monitoring of mammals in the savanna burning projects has found increases in many of the rarer small mammals, although not all mammals benefited. In the Kimberley, high conservation value species including the golden backed tree rat, brush tailed rabbit-rat, grassland melomys, northern brown bandicoot, red cheeked dunnart and Kimberley Rock Rat all increased. But some of the more common mammals decreased under savanna burning methodology including the northern quoll and more common rodents, the delicate rat, pale field rat and common rock rat. So there is more work to do to perfect fire regimes, but they are trending in the right direction.

What is savanna burning abatement methodology?

It is up to the land managers how they achieve this, as long as it is not through removing the fuel by grazing. However, usually it requires planned burning of the landscape during the wet and early dry season, when fires are less severe. This creates cool patchy fires that don’t burn as much of the grass and woody plants, and hence have fewer greenhouse gas emissions. It reduces fuel loads and creates fire breaks across the landscape that help to stop late dry season fires from spreading too far. Fewer hot fires also leads to increased woody cover, and therefore more carbon stored in the landscape. This is good if you want to be paid to grow carbon, but maybe not so much if you want to grow cattle, because woody plants can compete with the pasture layer, leading to reduced grass for cattle. Additional savanna burning methodologies are being developed now that will allow land managers to be paid for the extra carbon they have stored as well as the emissions they have abated, but to be part of this new methodology land managers must agree to lock their land into the project for at least 25 years, so it will not suit everyone.

It depends. Some stations will have almost all of their land used for grazing, and fire will not be that frequent, so there is no need for a savanna burning project to reduce fire frequency. The more productive grazing land in northern Australia often has too little, rather than too much fire. However some stations have less productive land that is either not used for grazing, or is only lightly grazed, leaving high fuel loads. These areas often have frequent fire and could be better managed to reduce late dry season fires. There are quite a few cattle stations in the Kimberley and North Queensland that have fire projects for this reason.