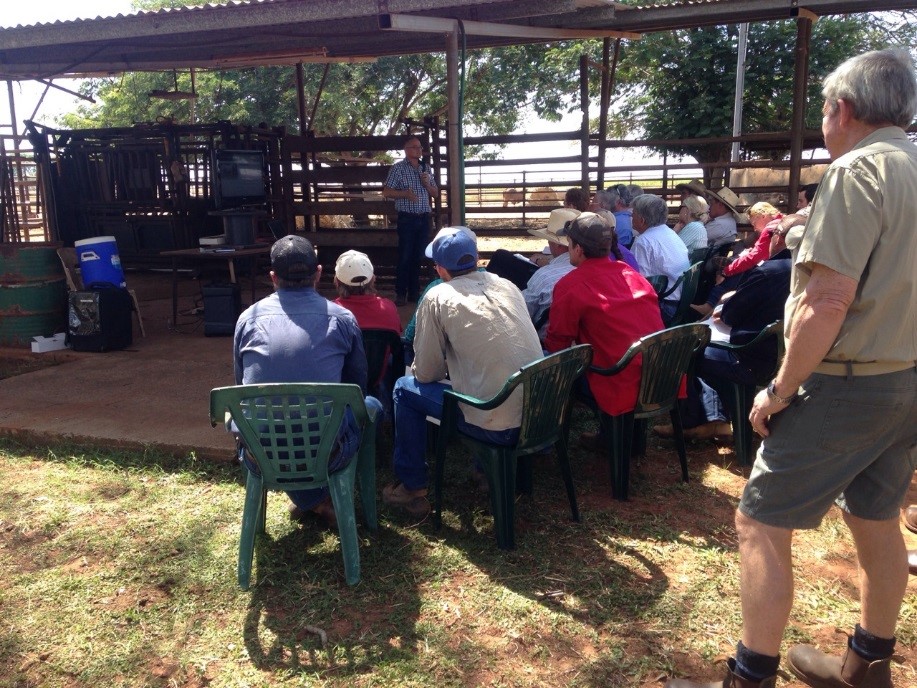 A field day for farmers and beef producers alike was held at Douglas Daly Research Farm on Thursday 31 August.

The first of many interactive presentations focused on the influence and importance of locally conducted research trials on reproduction genetics in Brahman cattle. Dr David Johnston from the Animal Genetics and Breeding Unit of the University of New England (partners in a reproduction genetics project with NT Department of Primary Industry and Resources (DPIR)) explained how the data that has been collected in DPIR herds over the years is allowing genomic studies to more accurately evaluate animals and increase the accuracy of selection.

“Eventually, we will be able to tell what specific genetic traits each beef animal carries by simply taking a tail hair sample and running an analysis. The current technology is close to being able to do that, however at the moment, we are still matching what traits are located where on an animal’s genome to verify the information we think we have so data collection at this point in time is still vital.” Dr Johnston said.

Traits of particular interest to Dr Johnston included those that have the capacity to have a significant impact on an animal’s ability to contribute towards profitability ‑ age of puberty in heifers and duration of lactational anoestrus in females.

“Age of puberty is important. As part of the Co-operative Research Centre we monitored cattle that were managed the same, run in the same locations, were vaccinated against the same diseases, etc, the only thing different was the genetics. What we found, was that although some heifers had started ovarian cycling at an early age/light weight (200kg), some were still waiting to start cycling at 530kg, and the only difference between those two animals was genetics,.” Dr Johnson said.

To demonstrate this difference, Tim Schatz, DPIR Principal Beef Research Scientist, conducted an ovary scan via ultrasound on a heifer crush-side with the image reproduced on a large television screen for the field day participants to view in real time. Use of the ultrasound allowed the participants to see how puberty can be detected by the presence of a corpus luteum that develops after a follicle has been released, indicating that ovulation has occurred.

“Females obviously only have to go through puberty once. Therefore another reproductive trait of economic importance is the duration of lactational anoestrus,  the time until they resume cycling after calving, experienced by a female,” Dr Johnston said.

“Again, the animals that were monitored in the CRC project were managed the same, run in the same location, vaccinated against the same diseases, the only difference was genetics. While some females were able to get back in calf within two months, others weren’t able to recommence cycling until months after the weaner had been removed. Cycling at this time of year presents problems as the cow then may become pregnant leading to calving at the least desirable time of year from a nutritional viewpoint.”

Continuing on the genetic theme, Tim Schatz then presented the recent results of the cross breeding trial, comparing the performance of identically managed Brahman to Brahman cross Senepol offspring. This trial was developed in response to a strengths, weaknesses, opportunities and threats analysis conducted with the Katherine Pastoral Advisory Industry Committee that identified reliance upon the live export markets as a big threat to the profitability of pastoral businesses in northern Australia. At approximately 18 months, the male progeny of both genotypes were transported to a feedlot facility where the crossbred steer carcasses were tenderer and received a higher price per kilogram than their Brahman counterparts. The trial was replicated the following year with the offspring being sold to the Indonesian live export market where their performance in Indonesia was again monitored and the crossbred steers again performed better than the Brahmans.

The female portion of these cohorts were retained in lease paddocks near Katherine to determine how the crossbred females perform in comparison to Brahmans in a harsh environment. Running together under the same management and nutritional conditions, Brahman Senepol crossbred heifers had similar reproductive performance as their Brahman sisters. The concluding finding from this project has been that if producers want to diversify their market options, crossbreeding their Brahman breeders with a tropically adapted Bos taurus bred sire is likely to not have negative implications on the reproductive capacity of the herd in the future should the crossbred heifers be retained.

Attendees of the field day were next treated to a tour of the Douglas Daly Research Farm facilities where DPIR research scientists summarized results and observations from the Cell Grazing trial and learnings found when establishing leucaena under a 10ha centre pivot irrigator.

“The biggest challenge we have had so far is matching the available dry matter of the pasture to the protein content of the leucaena to maximize beef production,” Peter said.

“We are yet to find a pasture species that is able to produce enough dry matter during the dry season, even under irrigation, to match the recommended dry matter : protein ratio. To address this issue we are currently opening up additional areas to allow the animals to get the roughage they need, however the strategy is still not perfect; the leucaena is getting too much growth on it making the most nutritious parts of the plant unavailable (too high) for young growing animals to reach.”

The next stage of the trial will be to grow enough seed of the pasture species “Nucal” which has good cool season growth to plant under the irrigation between the leucaena rows. There is currently a shortage of seed of this particular cultivar.

Arthur Cameron, Principal Pasture Scientist, Berrimah Farm, was able to provide a summary of recent research on the cool season growth of tropical grasses at Coastal Plains Research Station (CPRS), and summaries of a series of trials looking at the rate and timing of nitrogen applications on yield and quality of grass hay.

“The trial at CPRS showed us that there are seven other alternatives to Finecut Rhodes grass for irrigated dry season grass hay production, particularly Nucal panic, the highest yielding cultivar. The earlier trials on amounts and timing of nitrogen application for grass hay production showed that yield was increased by split N applications, but the amounts needed to raise quality of the hay were uneconomic,” Arthur said.

“While in the past we have worked extensively with pastoralists to control the weeds on their property, this will no longer be the case looking forward,” Tahnee said.

“The Weed Management Act has been around for almost a decade and it’s time for us to now start acting upon our obligations. One of the changes stakeholders might notice is that it is no longer the sole requirement of the owner to do something about declared weeds on their land – under the new legislation it is also the responsibility of the land occupier, whether that be renter or lessee, to act upon the growth or occurrence of weeds, and we will be enforcing these regulations accordingly. Upon stating that, we will of course always be willing and open to providing advice on weed control and the development of weed control plans.”

The day was attended by representatives from nine pastoral enterprises from across the NT. 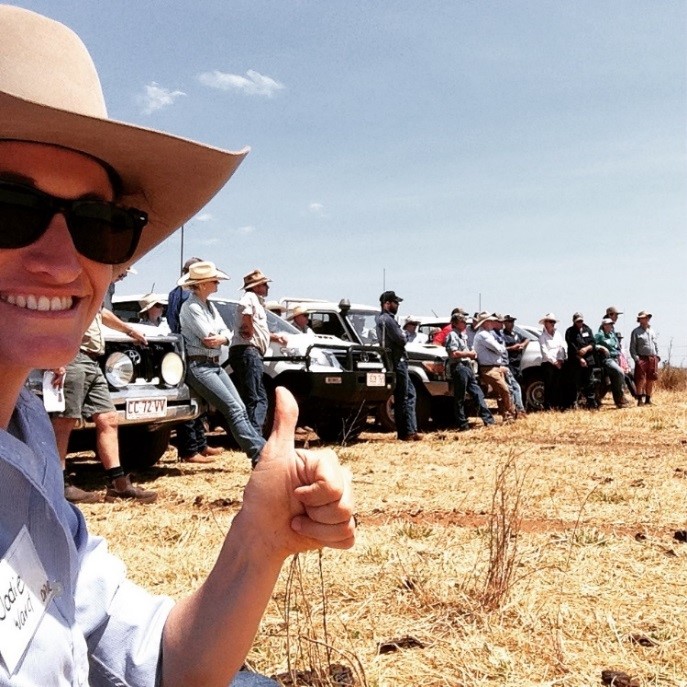 Figure 2: Attendees listening intently to Dr David Johnston from the Animal Genetics and Breeding Unit of the University of New England