Many readers will be aware of the Phosphorus (P) supplementation study that has been running at the Department of Primary Industry and Resource’s Victoria River Research Station (Kidman Springs) since 2014. Major benefits from P supplementation have been demonstrated over the last few years, but this year’s results have been even more dramatic and indicate that P supplementation is one of the most important activities that cattle stations can adopt to improve profitability in P deficient areas. At the weaning muster in May this year, the effect of P deficiency on cows that had calved for the second time was quite confronting. The body condition of lactating P- cows (that had no access to P supplement) had deteriorated to the point where the decision was made to stop the study due to animal welfare concerns. While the study was scheduled to run for another year, the huge differences between the treatments seen so far made it hard to justify subjecting the P- cows to another year without P supplement. It would have been good to get data for another year, however if people are not convinced of the benefits of P supplementation from the results so far then running the study for another year is unlikely to make a difference.

The study began in mid 2014 by randomly allocating 179 Brahman weaner heifers to treatments that either received P supplement (P+) or did not (P-). The allocation process included stratifying for weight, making sure that the average and range of weights were similar for both treatment groups (average weight: +P = 171.7 kg, -P = 171.2 kg). The treatment groups grazed two similar, acutely P deficient (average Colwell P soil test results: 2.5 and 3.1 mg P/kg) neighbouring paddocks. The paddocks were set stocked and the treatments swapped paddocks at the first round muster (May) each year to minimise any paddock effect.

The loose lick supplement was distributed twice-weekly and fed year-round in troughs that were sheltered from rain using sheds. The wet and dry season recipes of the supplements fed to each treatment group are shown in Table 1. Basically, salt was substituted for Biofos® in the P- supplement. However, limestone was added to the P- wet season supplement to make the ratio of calcium to P the same in both licks. 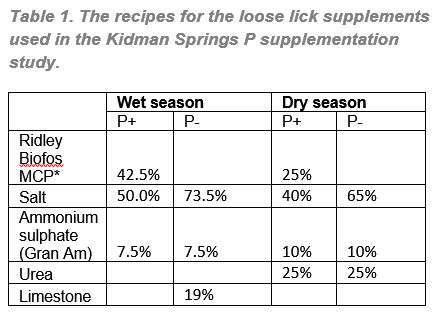 However, this only tells part of the story, as it doesn’t account for the greater mortality rate in P- and the heavier weight of cows in P+ (meaning that the P+ cows are likely to be more valuable at the time of culling for age). The cumulative mortality rate from the start of the study to when it was stopped in May 2019 was 13 per cent higher in P- (+P= two per cent, -P=15 per cent) and the average weight of cows was 96 kg heavier in P+. When the greater salvage value of cows in the P+ treatment ($26,026 in May 2019) is added to the extra value of weaners produced, the return on investment by May 2019 was 880 per cent. This sort of a return on investment is quite staggering and although it is not a proper economic evaluation, it indicates how great an effect that P supplementation can have on the profitability of properties in P deficient areas (note – a proper economic evaluation will be done in future).

The reason for the dramatic deterioration in P- cows during their second lactation is likely to be because so much P had been drained from their systems during their first and second lactations. If cows don’t get enough P from their diet when they are lactating, they mobilise P from their bones and tissues to put into milk. This occurring over two lactations without their P stocks being replenished by supplementation seems to have resulted in the P- treatment crashing.

This study has documented the large effects on productivity and profitability that providing P supplements to heifers and cows can have when they are grazing P deficient country. It has shown very large returns on investment from P supplementation and is already resulting in increased adoption of P supplementation.  However, it should be noted that the response will vary depending on the level of P deficiency and benefits of this scale may not be seen where P deficiency is not as severe. 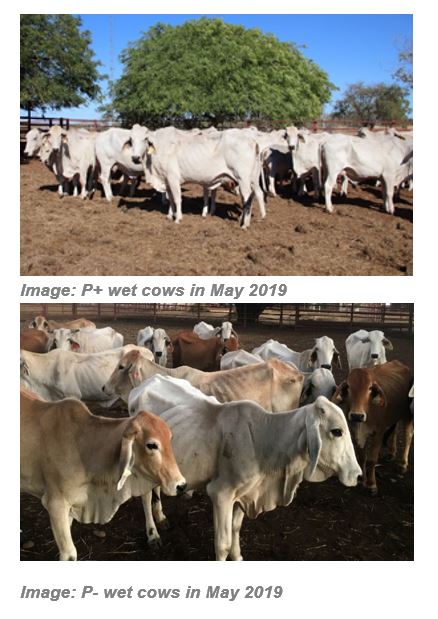