The University of Queensland (UQ) has been funded by MLA to research the impacts of fire and grazing on the function of biocrusts. The UQ researchers are collaborating with the NT Department of Primary Industry and Resources (DPIR) at the Kidman Springs fire experiment and with the Qld Department of Agriculture and Fisheries at the Wambiana grazing trial in north Queensland.

Biocrusts are the ‘living skin’ on the surface of the soil. They are composed of lots of different tiny organisms including cyanobacteria, fungi, green algae, bacteria, lichens, liverworts and mosses. They grow when it’s wet and become inactive when it’s dry, just like plants.

Why do we care about biocrusts?

They photosynthesize and fix carbon – the algae and cyanobacteria are green and photosynthesize just like plants. The carbon is incorporated into the soil and enhances soil carbon.

They fix nitrogen! – most cyanobacteria fix nitrogen out of the air just like legumes do! The nitrogen is in a form available to plants with excess stored in the outer slime (EPS). When it rains much of the stored plant-available nitrogen is washed from the EPS into the surrounding soil. Additionally, when biocrusts dry out and a proportion will break down (particularly during the early wet season rains) at which time the nutrient-rich biocrust is incorporated into the soil as organic matter. The amount of nitrogen biocrusts fix every year is similar to the amount of nitrogen fixed by native legumes in our grassy tropical savannas.

They are in the top one centimetre of the soil, usually covering the ‘bare’ spaces between plants. Biocrusts are found all over the world from freezing Iceland to hot deserts and wet-dry savannas, but different regions have different dominant organisms in the biocrusts, depending on the rainfall and temperature. In tropical savannas biocrusts are dominated by cyanobacteria.

In northern Australia they often appear as dark staining on the soil surface in the dry season (Figure 1). They can form dark green slimy films during the wet season, as seen in the images below. 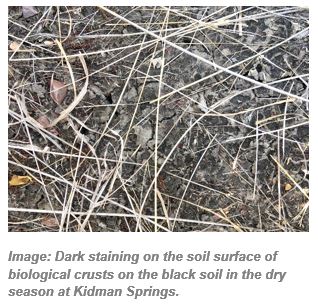 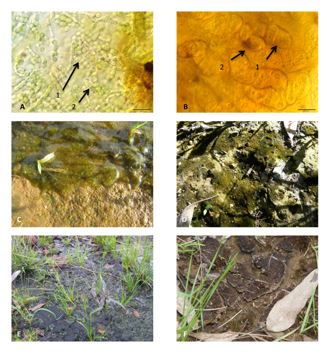 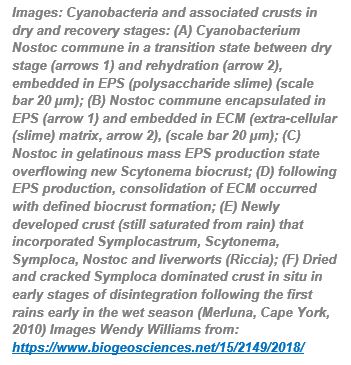 What effect does fire and grazing have on biocrusts?

Fire can enhance biocrusts by removing litter, trees and shrubs that would otherwise compete as ground cover, yet you need the right amount of fire, not too much, not too little. Biocrusts in Australia’s tropical savannas, like our native vegetation, are well adapted to fire because they evolved with fire. Preliminary sampling at our Kidman Springs Fire experiment found the highest soil plant-available nitrogen (fixed by biocrusts), was in four yearly late dry season burnt sites, more than unburnt or two yearly late burnt sites.

Grazing can also potentially open up interspaces for biocrusts by reducing plant cover. Nevertheless, the trampling by hooved animals is not something Australian ecosystems have evolved with, so our biocrusts are quite susceptible to heavy trampling. The effects of moderate vs. heavy grazing on biocrusts will be examined at the Wambiana grazing trial near Charters Towers.

If trampling is bad for biocrusts how can we manage grazing to benefit biocrusts?

Biocrusts grow during the wet season, just like plants. During the dry season they dehydrate and become dormant. The carbon and nitrogen they fix is broken down and recycled by other critters in the biocrust, and then becomes incorporated into the soil and available to plants. We suspect that spelling over the wet season and grazing during the dry season will benefit not only palatable plants, but also biocrusts, allowing them to maximise their growth and nitrogen fixation. As pruning a shrub or tree in a garden encourages growth, moderate disturbance of biocrusts can promote growth. It is also possible that some intermediate level of grazing will enhance growth and productivity of biocrusts in the savanna.