During May, a Darwin property manager reported two steers out of a mob of three-year-old steers seemed to be wasting away over a period of six weeks. One steer died, while the other was very skinny, weak and scouring, and it was euthanased when it became unable to stand.

A post-mortem found a heavy burden of Barber’s Pole worm (Haemonchus contortus) in the abomasum. A full range of samples were submitted to the lab, and showed a very high faecal egg count (FEC) of 1160 eggs/gram of faeces. The steer was also persistently infected with pestivirus. Three day sickness, Johne’s disease and mad cow disease were ruled out.

Pestivirus (also called Bovine viral diarrhoea virus or BVDV) can reduce herd reproductive rates through infertility or abortion, as well as reducing immunity to a range of other diseases. The effect of BVDV depends on when the infection occurs in a cow's life. If a cow is infected while pregnant, the calf can become ‘persistently infected’ with the virus, and spread disease between herds. While there is a vaccine available for pestivirus, the risk of contact with persistently infected animals in extensive areas is lower due to the large areas that cattle graze. Consequently, the approach to managing the risk of BVDV will be different for every property.

The Barber’s pole worm sucks blood from the lining of the stomach, which can cause major blood loss. Counts of over 200 eggs/gram of faeces are enough to cause illness in weaner cattle, especially if they have other diseases at the same time. These worms are found in the fourth stomach (abomasum) and can be seen with the naked eye. They are about an inch long, red and white, and look like human hair! Signs of Barber’s pole worm can include pale gums, bottle jaw, weakness and death. The worm is a prolific egg layer and large numbers of worms can accumulate on the pasture (especially in the wet season). Barber’s pole worm can be treated with commercial parasite injectables and pour-ons. 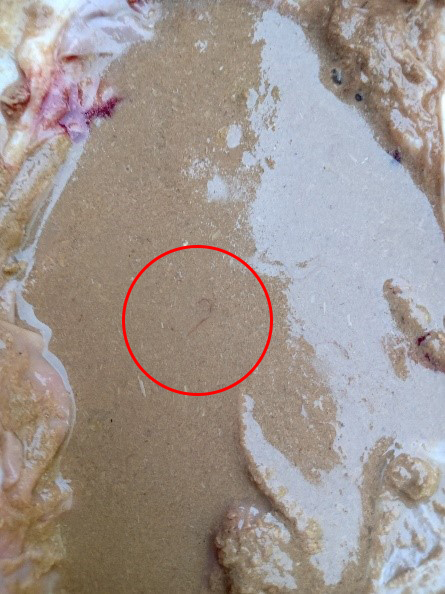 Above: Barber’s pole worms present in the stomach contents of a weaner