The disease ehrlichiosis, an exotic tick-borne dog disease, has been confirmed in the Territory.

Ehrlichiosis is a disease spread by the brown dog tick. It primarily affects dogs. It can result in death if not properly treated.

Caused by a tick-borne bacteria, ehrlichiosis requires veterinary treatment and early treatment provides the best chance of recovery. The bacteria is transmitted to dogs by the brown dog tick and can cause fever, lethargy, loss of appetite, weight loss, cloudy or sore eyes, pain and stiffness, bleeding disorders such as nosebleeds, and, if not properly treated, death.

Dog owners should have their dogs on a tick control program, regularly check their dogs for ticks and be on the lookout for signs of the disease. 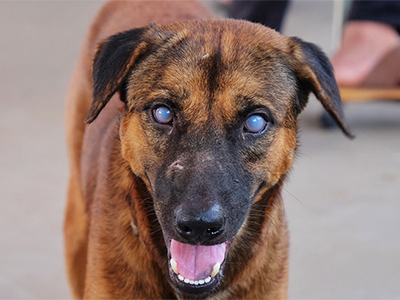 Above: Dog with ehrlichiosis showing signs of sore eyes: reference