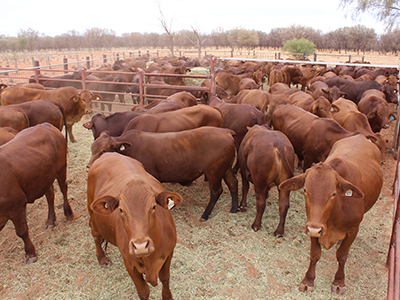 The Old Man Plains Research Station (OMP) turns off steers each year as part of the Quality Graze research project. This project aims to identify optimal grazing systems that can consistently produce premium beef in arid zone rangelands, despite the highly variable climate.

Steers are grown out to 30 months of age before sending to slaughter around early April. From 2010‑2019, high quality steers were turned off every year, in both above and below average rainfall seasons. This consistency was largely due to having an appropriate stocking rate and good land condition. With good land condition, even relatively small rainfall events will produce the useful green growth in pasture that steers need to develop enough fat for Meat Standards Australia (MSA) grading. Provided the steers have access to sufficient nutritious dry grass, these fat reserves can be retained through to slaughter. MSA is a ‘tenderness guaranteed’ grading program that grades beef based on eating quality.

In May 2019, 41 per cent of steers branded in 2018 were on track with building fat reserves, with P8 fat scores measuring 5mm or greater (a fat depth of 5mm at the P8 rump site is a threshold required for achieving MSA grading). By December 2019 this had dropped to 28 per cent. This was the first time there had been a decline in fat scores recorded in OMP steers since the Quality Graze project began. Low rainfall was only part of the reason.

As anyone in the district will tell you, the prevailing conditions since 2018 have been dry to very dry with few growth events. However, a significant pasture growth event did occur in November 2018. This provided abundant standing grass that would typically be both long-lasting and also capable of holding good nutrition for up to two years. This was the feed that led to the initial development of fat in the steers. In Central Australia, while pastures can retain nutritional value for extended periods, this standing dry feed can be spoilt by rain. Generally, if there is enough rain to spoil standing dry feed, then it is also enough to promote new growth. This is not always the case though, and a small rain event in May 2019 caused more harm than good. A total of 12mm fell over three days, generating very little new growth, while initiating deterioration in the nutritional quality of the remaining dry pasture. It is likely that this triggered the subsequent decline in fat deposits in the OMP steers. A similar rainfall event of 15mm occurred over three days in September, and probably caused further deterioration of feed quality.

Central Australia felt the effects of a positive Indian Ocean Dipole well into January 2020, with no rainfall and persistent very hot weather. When the 2018 branded steers were assessed in late February 2020, a mere eight per cent met the 5mm P8 fat depth threshold. This decline in fat depth related to declining feed quality and environmental stress. The steers were then combined into one mob in preparation for trucking and went onto feed in a paddock that hadn’t been grazed for about nine months. At the same time, moderate falls of late summer rain (66mm in late January/early February followed by 30mm at the beginning of March) provided a supply of fresh green pick in drainage lines and in run-on areas. The steers benefited from this, and 38 per cent had a P8 fat score of 5mm or greater by mid-April. While originally targeted for sale in early April, the decision was made to hold the steers for an additional five weeks. When the steers were slaughtered in late May, 71 per cent achieved a P8 fat score of 5mm or greater. In total, 61 per cent of the herd achieved MSA grading, a much better outcome than seemed possible in February.

On first inspection, the good final fat scores might seem to be just a result of the late summer rain turning things around. However, there is a more complex and much more significant story here. The research program records detailed data on pasture as well as on cattle production. Linking these together shows just how important good land condition is for getting the most out of rain events. One of the key management activities at OMP is matching stocking rates to carrying capacity in order to maintain land condition. In this instance, good land condition maximised standing dry feed and sustained steer growth through two consecutive dry seasons. When the late rains came, the good land condition meant the country could quickly respond with green pick. This green pick, along with the feed reserved in the trucking paddock, enabled the steers to bounce back and be sold for premium prices.

Making the decision to reserve ungrazed feed can be difficult, particularly in dry years. However, on this occasion it provided the opportunity to hold steers for a little longer and achieve a much better return in an otherwise very dire-looking season. 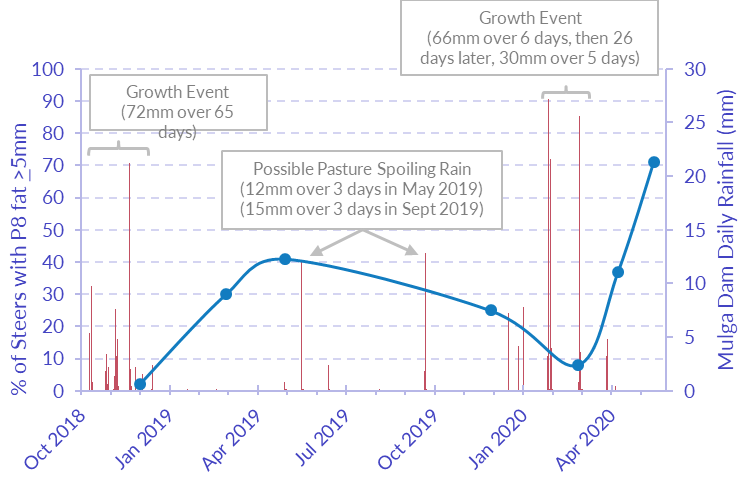 Above: Percentage of steers achieving P8 fat scores 5mm or greater from calving in October 2018 through to slaughter in May 2020. The daily rainfall data shows the growth events experienced in the summers of 2018/19 and 2019/20. It also highlights the pasture spoiling rainfall events of May and September 2019 that are thought to have resulted in a decline in feed quality and subsequent loss of P8 fat.

This article originally appeared in FutureBeef.