The CalfWatch project being conducted by the Northern Territory Department of Industry, Tourism and Trade (DITT) the former Department of Primary Industry and Resources, is using new technology to remotely monitor calving and investigate calf loss.

The study is being conducted at Manbulloo Station near Katherine in the Northern Territory (NT) in a 2,215 ha native pasture paddock that NT DITT leases.

Birth sensors and global positioning system (GPS) tracking are providing insights that were not previously possible. Pregnant cows are fitted with birth sensors that send a signal to researchers when the cow starts calving, and GPS tracking collars that allow the cows to be found. Cows are observed with minimal disturbance a so their behaviour is not greatly impacted

During the first year of the project in the 2019/20 calving season, calving outcomes were determined for 208 cows. The overall calf loss from the pregnancy test to weaning was 17 per cent in mature cows, of which six per cent was due to bottle teat. One of the preliminary findings from the first calving season is that bottle teats are a bigger problem than we realise. 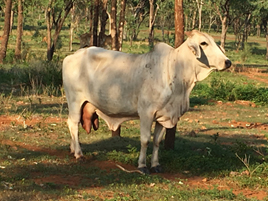 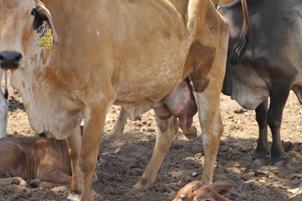 Bottle teat is a condition affecting cows where the teats on the udder become enlarged . When this occurs, it can be difficult for calves to get their mouth around the teat to suckle. This can result in the calf missing out on colostrum, the first milk produced by the mammary glands following delivery of a newborn, and with the calves dying from malnutrition.

Many cows with bottle teats are likely to be undetected in northern beef herds resulting in calf loss over multiple years. A number of the cows that lost their calves were observed to have bottle teats shortly after calving, but several weeks later the teats had resolved themselves and looked normal again. As a result it is unlikely that these cows would have been identified as having bottle teats at a muster several months later.

Numerous studies have found that bottle teats increases calf mortality. One study conducted in Queensland with Brahman and Tropical Composite cows found that the odds of a calf dying were more than four times greater if their mother had bottle teats (Bunter et al. 2014).

The likelihood of calf death is higher if a calf is weak at birth and if all teats are enlarged. A study with Bos indicus cross cows in central Queensland found that calf loss was not significantly increased if a cow had one to three enlarged teats, but was much higher at 49 per cent compared to 6 per cent when cows had four bottle teats (Frisch 1982).

Another Queensland study where post mortem examinations were carried out on cows with bottle teats found that many had mastitis. Mastitus was considered secondary in nature to calf death with bottle teats considered to be most likely due to anatomical defects such as problems with the ratio of connective tissue and muscle in the teat wall (Holroyd 1987).

Studies have found that bottle teats is moderately heritable d (Bunter and Johnston 2014; Wolcott et al. 2017). Therefore, it is a good idea to cull cows with bottle teats to avoid them losing more calves in future. This may also help in them producing daughters which may develop bottle teats.