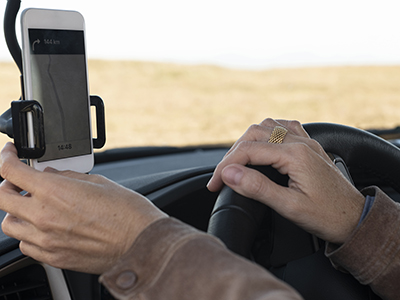 Take the worry out of navigating a pastoral lease

Learning your way around a new patch of country comes naturally to some, but not so much for others. Fortunately, advances in technology have paved the way for contemporary solutions to an age‑old problem.

The Australian outback is well known for its raw beauty and perilous nature. People becoming lost on a pastoral lease poses significant risk to human health and safety with search and rescue operations often costly with regards to time, human resources, equipment and lost productivity.

The information available to people navigating pastoral leases varies considerably from property to property, presenting increased challenges. Most leases have infrastructure maps with varying levels of detail and currency, while other leases have internal roads, tracks and water points marked with sign posts or objects such as tyres, drums and old jerry cans to indicate turn-offs.

As the name suggests, offline mobile map apps work without WiFi or network connectivity. Some popular apps like Google Maps and Apple Maps allow you to download maps while online, but this is generally limited to public roads and tracks, not infrastructure and internal roads on pastoral leases.

Pastoral lease infrastructure maps can be connected with offline mobile map apps through the process of georeferencing. Georeferencing is the term used for identifying a point on the earth’s surface and matching it to its location on a map using international standard coordinates.

Digital pastoral maps are usually in PDF format. A georeferenced map will have the coordinates of the lease stored within the PDF. When accessed through specific software applications, the GPS locations of anything within the boundary of that map are available.

When using any sort of navigation system, a dot generally appears on the screen to indicate the user’s current position (this is a blue dot in Google Maps). When a georeferenced pastoral map is accessed through the appropriate mobile software application, a dot will also appear to indicate the user’s position. The difference is that the map being viewed is a pastoral map that, if up to date, will show where the user is in relation to all marked infrastructure, such as tracks, fences, water points and yards.

There are a number of different mobile map app products and the features included depend on the individual product and subscription tier (some have free versions available). With certain products users can:

This means that, in addition to using the app for navigational purposes, it can be used to record the coordinates of broken infrastructure or where equipment was left behind (including a photo attached to that place mark on the map) so another user can locate it on their own.

Each product provides different options, and users should consider their own needs and speak to the manufacturers before choosing a product.

Screenshot of what the search shows when you look up “offline maps” on your phone in the App store.

“I have been using PDF maps in an app for around six years now and have found it a very valuable property management tool. We provide all our employees with a current map of the property, that includes all roads, fences and water points, and give them a rundown on how to use the app.

We have found it a very good safety feature for workers as no one can really get lost and with most station staff always having a mobile phone on them, they always have the ability to know where they are.

PDF maps save a lot of time. If someone sees an issue with stock or a broken fence or anything really, they can pinpoint the location so that we can get back there and fix the problem quickly without the need for the same staff member to go back to explain where it is,” said Ash Elsum, Flying Fox Station, Northern Territory

This article was been written by Stephanie Coombes, Department of Primary Industries and Regional Development, Western Australia and Meg Humphrys, Department of Industry, Tourism and Trade, Northern Territory and originally appeared on FutureBeef