The ‘Reducing calf loss from exposure’ project (besides being a mouthful) has been implemented at Avon Downs station to assess the effectiveness of providing shade for reducing calf mortality in relatively treeless Mitchell grass plains of the Barkly Tableland.

This article presents preliminary results from a pilot study which involved 150 pregnant purebred Wagyu heifers that were predicted to calve between October and December 2019 and were randomly allocated to either a paddock that had one feedlot-grade shade structure (50m x 25m in size) installed within 500m of each water point (SHADE) or not (NO SHADE). Pregnant heifers were put into the trial paddocks for approximately seven months and mustered in April 2020. Heifers observed to be lactating beyond their expected calving date were considered to have successfully weaned a calf. 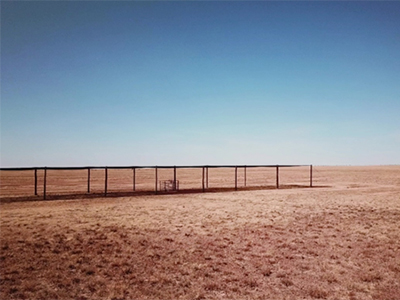 Above: Picture of the shade structure at Avon Downs station.

The level of calf loss experienced by first-lactation heifers with access to SHADE was comparable to NO SHADE with both groups experiencing approximately 29% calf loss.

Five heifers from each paddock were fitted with GPS collars. GPS location data were summarised by generating daily counts for each collar of GPS locations within 500m of water and total number of GPS locations recorded over a single day and between 10am and 3pm. Four GPS units were also able to record temperature. The temperature records were summarised by averaging all records for each collar across a single day as well as between 10am and 3pm. 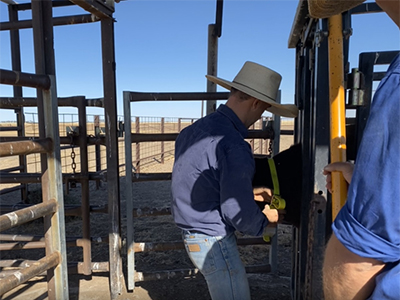 Above: Fitting a GPS collar to a heifer

Table 2. Percentage of GPS locations within 500m of water and collar-recorded temperature per day and between 10am and 3pm.

These preliminary results appear to indicate that the provision of shade near watering points does not have a large impact on either incidence of calf loss (Table 1), average GPS collar-recorded temperature or time spent near the shade for heifers during summer when considered across an entire day (Table 2). However, when analyses were performed on a subset of data recorded between 10am and 3pm, the daily average collar-recorded temperature for SHADE was 0.5°C lower than for NO SHADE. This is not easily explained as there was no evidence of heifers spending more time resting in the installed shade near water.

This calf loss research is ongoing; additional collars have recently been deployed and an assessment of the available natural shade in paddocks using satellite imagery is planned.

In late August, with the help of station staff, 214 GPS collars were fitted to the next cohort of pregnant first-calf heifers grazing these trial paddocks. These GPS units will provide data at either 5, 10 or 15 minute intervals with equal numbers of units set to this frequency of fixes.

Check out the FutureBeef project page