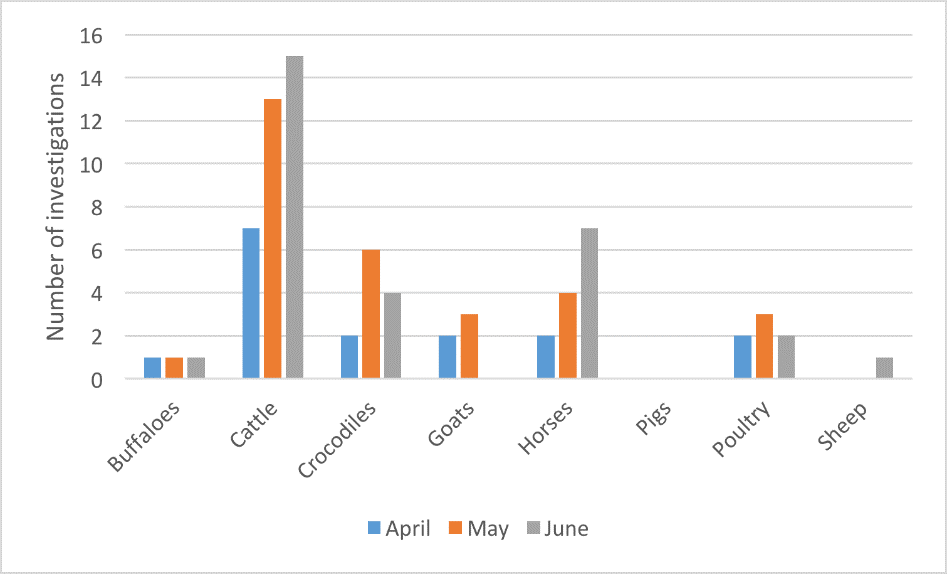 Figure 10. Livestock disease investigations by species for April to June 2017

From April to June 2017, 76 livestock disease investigations were conducted to rule out emergency diseases or investigate suspect notifiable diseases across the Northern Territory (NT). Figure 10 shows the number of investigations by species of livestock.

The following case reports are a selection of field investigations of disease incidents during the quarter.

Acute neurological disease was investigated in an 18-year-old stockhorse mare in June 2017. The mare had been losing weight for the previous three weeks despite a normal appetite, and was observed to suddenly become unbalanced with a ‘hunched up’ stance. The horse was in a group of three horses that had been brought to the Darwin property from the Katherine region 12 months previously.

On clinical examination, the mare was mildly depressed and dragging the toes of the hind feet, which was more apparent when turned in a tight circle. She was easily pulled to the side on the tail sway test. There was no pain or abnormalities found. Hendra virus infection was ruled out with testing of nasal swabs and blood. Further tests suggested that there had been injury to the liver, as well as mild muscle damage associated with loss of muscle/movement control.

On questioning the owners, it became apparent that the horse had access to pastures containing Crotalaria sp. over several years when residing in the Katherine region. Crotalaria sp. contain pyrrolizidine alkaloids that can cause cumulative liver damage and loss of brain function due to the liver being able to remove toxins from the blood (hepatic encephalopathy) in horses several months after ingestion. This condition is commonly known as ‘Kimberley horse disease’ or ‘walkabout disease’. There is no effective treatment for this disease. Despite no known recent exposure to alkaloids, the mare continued to deteriorate and was euthanased. For further information see Agnote K56: Walkabout (Kimberley Horse) Disease. 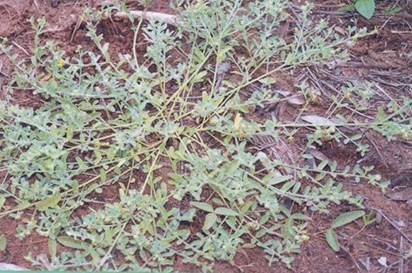 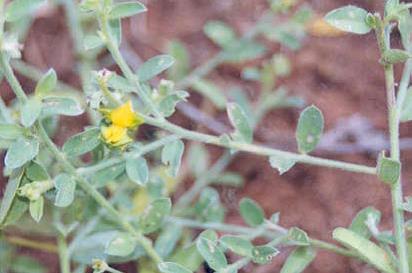 A notification was received from a member of the public with wildlife expertise who had visited a roadhouse in Central Australia in late March 2017, advising that three cockatiels in an aviary cage of 25 were exhibiting clinical signs consistent with psittacosis – a significant zoonoses.  A phcoolotograph of the most severely affected bird was provided, showing the bird ’fluffed up‘ and depressed, with stained plumage and one eye swollen and partially closed, indicating conjunctivitis and possible sinusitis.

At a follow-up visit by the regional veterinary officer, the most severely affected bird was euthanised for necropsy. Gross necropsy revealed caseous conjunctivitis involving both eyes. Histopathology showed a marked squamous metaplasia of lacrimal duct and nasal mucosae, with massive intraluminal accumulation of keratin. There were no notable gross or histological findings in other tissues.  Polymerase chain reaction (PCR) testing of pooled cloacal, tracheal and ocular swabs from the euthanased and the two other affected birds excluded influenza type A, Newcastle Disease Virus and Chlamydiacae bacteria.

A diagnosis of hypovitaminosis A was made, and the owner was given advice to change the birds’ diet. No further losses have been reported. 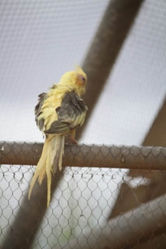 Figure 12. cockatiel with hypovitaminosis A

BHV5 can cause sudden death in young cattle

In the June 2017 Animal Health News we reported on a case of BHV5 which happened on a property outside Katherine in early May 2017. BHV5 is a virus that causes inflammation (swelling) of the brain in cattle. It was first discovered in Queensland in 1962, and is thought to be present worldwide. BHV5 is closely related to bovine herpesvirus 1 (BHV1), the virus which causes infectious bovine rhinotracheitis (IBR) and infectious pustular vulvovaginitis. Infection with BHV5 should be considered in cases of neurological disease or sudden death in young cattle in Northern Australia.

BHV5 is spread through the nasal fluid of infected cattle. When cattle come into contact with this infected fluid via the mouth or nose, they become infected and the virus spreads to the brain. In the brain, the virus can lay ‘dormant’ (not having any affect), or it can cause swelling which can cause neurological signs such as:

There is no treatment for BHV5, and severe cases can result in death. In cattle where the virus is dormant, it can reactivate and begin to cause signs if the animal becomes stressed- such as after weaning, mustering, transport or overcrowding. Disease due to BHV5 infection is most commonly seen in weaners under six months of age.

Diagnosis of BHV5 can be made by running lab tests on nasal fluid or tissue samples to detect the BHV5 virus. Generally a full range of post-mortem samples, including the brain, is required. As there are some severe strains of bovine herpesviruses which are exotic to Australia, it’s important to contact your vet and the appropriate testing done.

There is no specific vaccine available for BHV5. In cattle vaccinated against BHV1 or previously infected with BHV1, signs of BHV5 may be prevented. Even immune cattle can still shed the BHV5 virus to other cattle.

Review of the Cattle Tick Program

The Department of Primary Industry and Resources (DPIR) is currently responsible for the management and delivery of a regulated Cattle Tick Program, with co-operation from the cattle industry and other livestock owners, which aims to minimise the cost of cattle tick and tick fever in the Northern Territory (NT).

A review is currently being undertaken to ensure that an effective risk-based, practical and financially viable program is maintained for the management of cattle tick based on clear and simple regulation, sound technical evidence, and appropriate resource allocation through consultation with the relevant livestock industries and other stakeholders.  A discussion paper will be released in September 2017, and is focused on addressing several key issues to determine the future management and delivery of the cattle tick program in the NT. These issues include:

Following these outcomes, a decision on the funding mechanism (partial cost recovery, full cost recovery, levy or a combination) for the cattle tick program in the short-term and longer-term will be required.

The review provides an overview of the history of cattle tick and management in the Territory including zoning changes, chemical resistance, regulated livestock inspections and treatment statistics for movement, program costs and revenue from inspection services and cattle tick management in other states. It also outlines the current regulatory framework related to notifiable disease reporting obligations, declared areas and movement restrictions for cattle tick and fees for service.

The potential risks associated with cattle tick management in and the issues, risks and benefits associated with options for the future management, delivery and funding of the cattle tick program in the Territory are presented for the cattle industry and livestock owners to consider. A timeline for the activities that will be required if changes are to be made to the program management and/or delivery including regulatory changes is also presented in the review. The review will be presented at industry organisation meetings and livestock owners and other stakeholders can provide feedback on the review to the department.

The National Arbovirus Monitoring Programme (NAMP) monitors the distribution of three important insect-borne viruses (arboviruses) of livestock- Bluetongue virus (BTV), Bovine Ephemeral Fever (BEF or three day sickness) and Akabane. For a number of years, the zone of bluetongue virus activity in the Northern Territory has been largely unchanged and as a result of ongoing sampling from collaborating properties, virus activity had even been shown to be retreating northwards much to the benefit of producers in Central Australia. The recent detection of positive animals on a property in the southern Tennant Creek District has necessitated the movement of the NAMP Bluetongue Line southwards into the northern Alice Springs District.

The Northern Territory currently has three zones under investigation namely a free zone, a surveillance zone and a virus activity (transmission) zone and these zones can change seasonally.  Approximately 15 properties have been affected by the changes in their bluetongue status and the DPIR has been in contact with properties in the new surveillance zone to obtain additional blood samples. 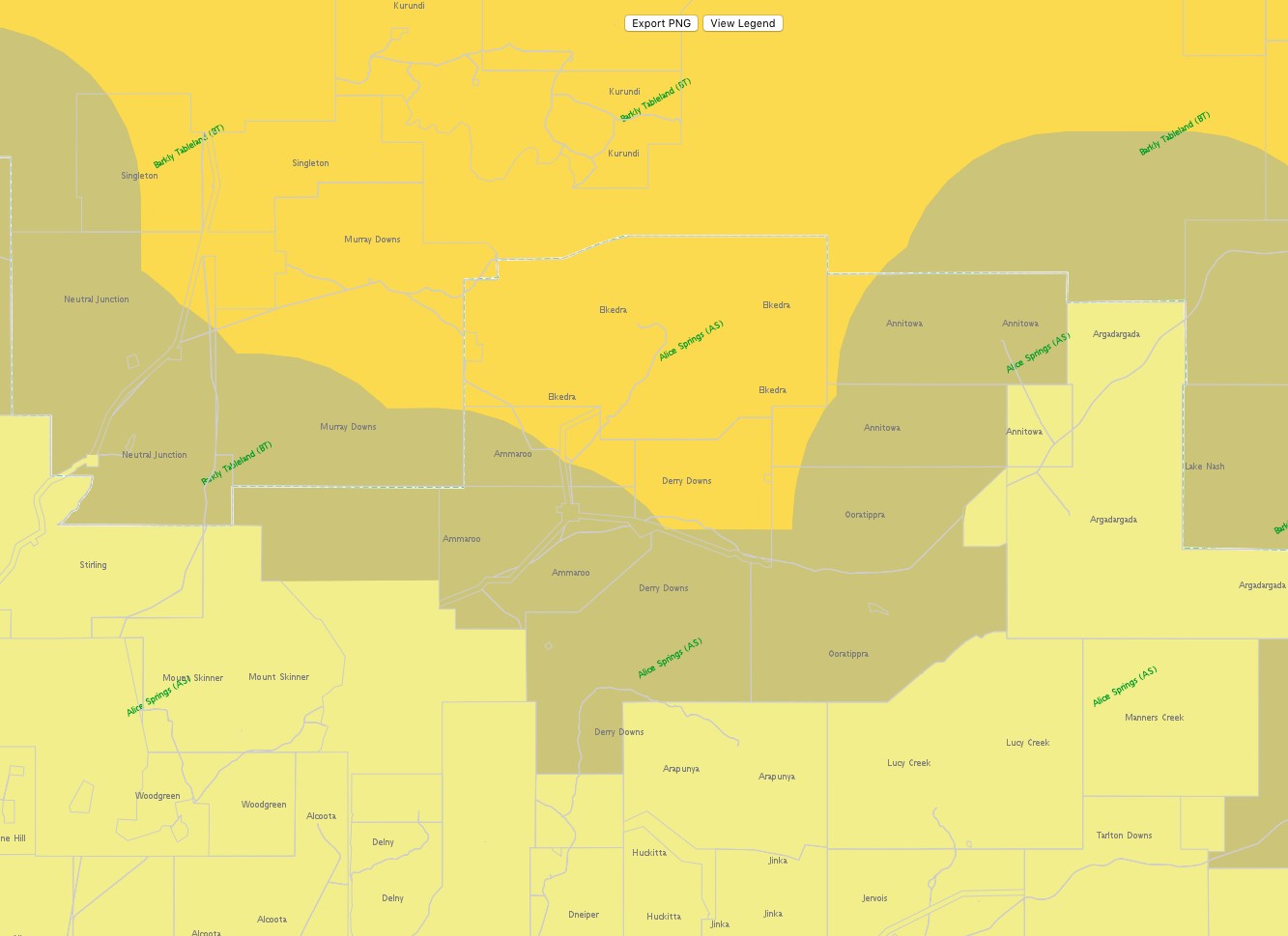 NAMP information is used to:

The Northern Australia Biosecurity Surveillance (NABS) project is one of several collaborative projects between industry, State and Territory and Commonwealth governments funded by the Agricultural Competitiveness White Paper to manage new and growing biosecurity risks in northern Australia.  The NABS project is focused on improving disease surveillance across northern Australia, and a number of key activities have been identified to achieve this during 2017-2019. These activities include providing resources such as tools, technology and training for cattle producers and vets, and subsidies for livestock disease investigations.

All pastoral properties in the NT will be provided with a post-mortem (PM) sampling kit during the annual property visits undertaken by the Livestock Biosecurity team. This kit can be used to collect samples for laboratory diagnosis in the event that livestock get sick or die.

We suggest keeping the PM sampling kit on the property in location known to staff. The Regional Veterinary officer will provide guidance and instruction on using and returning the sampling kit. DPIR offices in Darwin, Katherine, Tennant Creek and Alice Springs will return replenished sampling kits to the property when submitted as part of a disease investigation.

To get a PM sampling kit for your property, please contact your local Regional Veterinary or Livestock Biosecurity Officer. 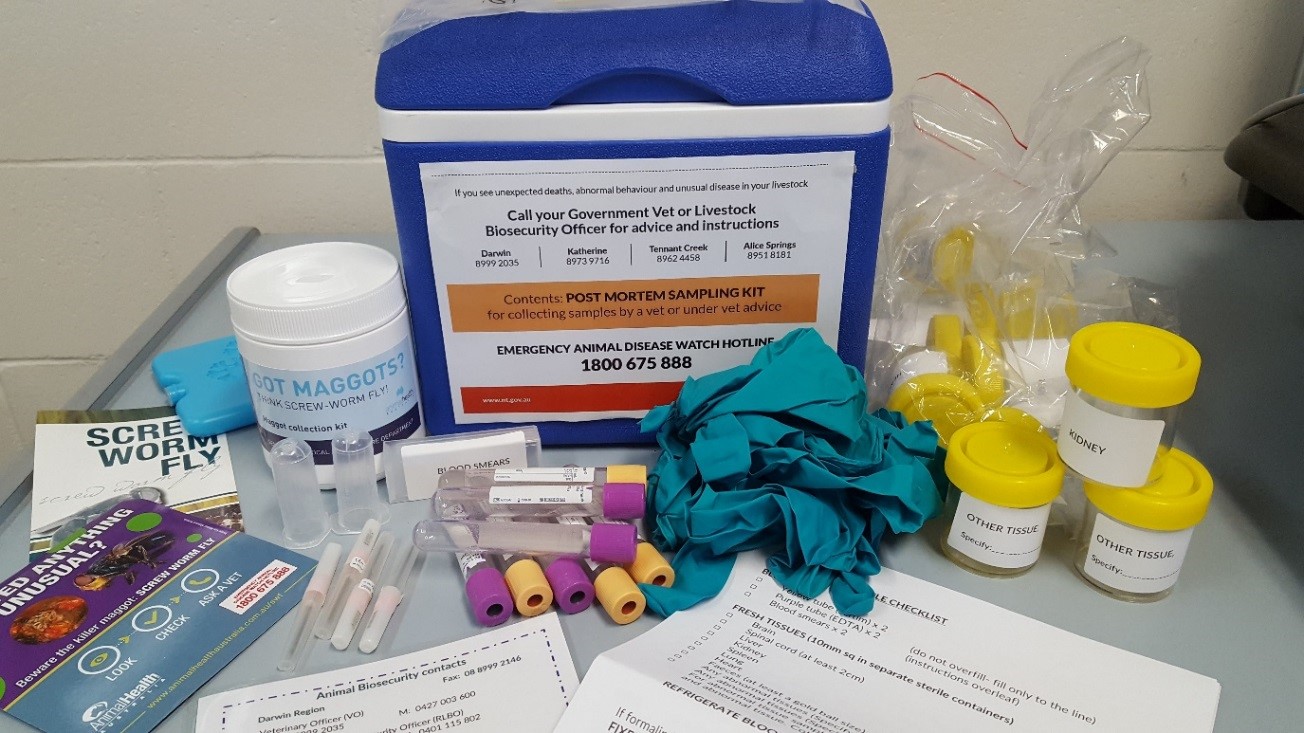 Screw-worm fly (SWF) is an aggressive insect pest of warm blooded animals (including people, wildlife and livestock). The fly lays eggs on wounds or moist body openings – the eggs then hatch to become aggressive flesh eating maggots.  SWF is related to the blowflies that cause fly-strike in Australian sheep, however SWF prefers hot, humid climates and cannot survive in frost-prone areas.

SWF is widespread through tropical regions, including some of Australia’s closest neighbours – Papua New Guinea, Indonesia, Malaysia and the Philippines. The potential spread of this pest from Papua New Guinea is one of the major biosecurity threats to northern Australia. Establishment of SWF in Australia would have major impacts on northern livestock production, livestock export trade and public health.

In order to eradicate SWF, Australia would need to establish a facility where sterile male flies could be produced in sufficient numbers to interrupt the SWF breeding cycle.  The construction of such a facility could take a number of years by which time costs could approach $500 million a year in lost production and control measures.  It has been estimated that up to 15 percent of cattle could be struck at any time in the potential zone of infestation, with the greatest losses due to the deaths of newborn calves as a result of navel strike.

Keeping Australia SWF free relies upon early detection, containment and ideally eradication before it can spread to other areas.  The Department of Primary Industry and Resources (DPIR) maintains a number of traps close to East Arm Wharf which specifically target SWF.  In addition, biosecurity officers regularly inspect cattle for evidence of fly strike.

Regular sampling and laboratory examination of maggots from infested wounds anywhere in Australia is also critical to early detection. Maggot collection kits will be distributed by your local Livestock biosecurity officer in the next few months during property visits.  If you see an animal with maggots in a wound please support surveillance by sending maggots to Berrimah Veterinary Laboratory – early detection and response is the key to control. 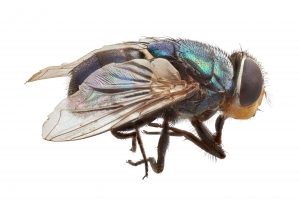 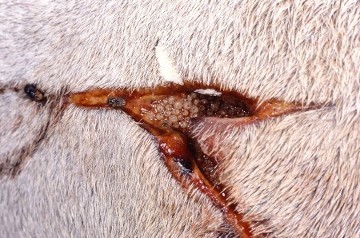