This report describes the findings in an approximately six month old Brahman heifer calf from a property near Katherine, with progressive nervous system signs. The calf first came to the attention of the producer at around two months of age when she presented at mustering with an odd coat colouring; this was reported as appearing golden and abnormally shiny.  The golden coat faded progressively with age, but was still partly visible on the inner surfaces of the limbs at six months.  The calf was recognised as a poor doer, and was brought into the house paddock with the dam for supplemental feeding and monitoring. Poor weight gain persisted, despite this intervention. 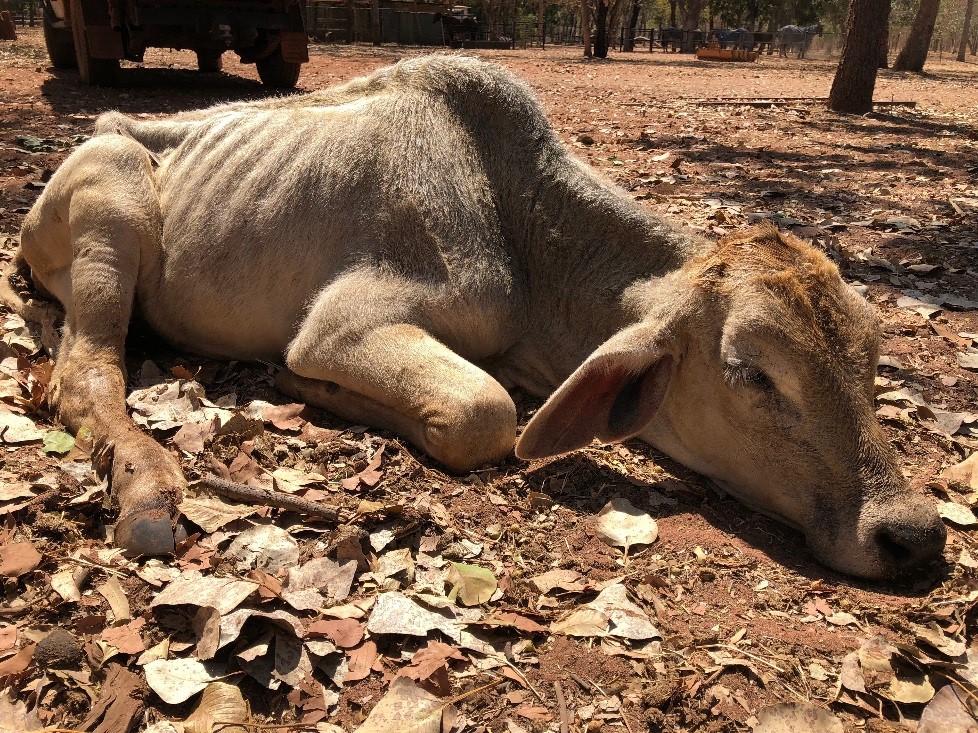 Over the next four months, the calf was noted in the yard to have increasing difficulty rising, developed a staggering gait and was seen to “plait” the hind limbs.  When veterinary investigation was requested, the calf was unable to stand without assistance, and in poor condition despite intense supplementary feeding over the preceding several weeks. The calf was euthanised on humane grounds and a full post-mortem performed.

There are a number of established inherited nervous system diseases in young cattle.  In cases where disease results from a genetic fault – also known as an inborn error of metabolism - chemicals that are by-products of normal metabolic processes build up, and are not removed, because cells cannot produce an essential enzyme.  Although such faults often occur widely across different cell types in the body, most of the visible abnormalities are due to effects on the brain and spinal cord. Affected animals are typically normal at birth, but begin to show signs of nervous system disease in the first weeks or months of life1.

In this calf, apart from a lack of body fat, there were no abnormalities that could be seen with the naked eye during the post mortem. Laboratory examination of the tissues however, showed that the calf had severely abnormal fluid regulation in the brain and spinal cord, leading to electrolyte imbalances and swelling in the cells. Swelling of brain cells for any reason is likely to progress to early death of the affected animal, either through progressive damage to the brain and lack of ability to perform basic functions (eating, drinking, standing and walking) or death from misadventure, secondary to disability. Tests performed on other tissues and blood were essentially normal.

In northern Australia, beef herds are dominated by Brahman, Brahman cross and Shorthorn breeds, in which Pompe’s disease, or Generalised Glycogenosis2, has been documented. Affected calves have difficulty rising, lose condition and typically die by 6-12 months of age.  Also known to be heritable in Brahman cattle is Congenital Myasthenic Syndrome4; affected calves are normal at birth, but become progressively weak over the first week of life and are generally destroyed within a few weeks.

Inherited metabolic storage diseases described in cattle breeds other than the Brahman, include; alpha-mannosidosis (Angus, Murray Grey, Simmental, Galloway, Holstein), neuronal lipodystrophy (Angus, Beefmaster), citrullinaemia (Friesians), shaker calf syndrome (Hereford), maple syrup urine disease (Hereford, Shorthorn)3 and neuraxial oedema (Hereford, Hereford-Friesian X). The course of the disease and the examination of tissues in this case, however, is not consistent with any of these well-described inherited nervous system diseases, and is also inconsistent with bovine spongiform encephalopathy (mad cow disease).

Therefore, this case is either the result of a random genetic fault, or may prove to be a new disease; we would be very interested to investigate any cases of nervous system disease, particularly in young cattle.  The “golden” coat colouring is interesting and may perhaps be a visible signpost for identifying future cases.