The following is an excerpt summary of a project run by Tim Smith, Queensland Department of Agriculture and Fisheries (QDAF). Mila Bristow, Principal Research Scientist, and Cassie McMaster, Plant Pathologist, NT DPIR, assisted in this project.

Changes in soil carbon occur slowly and the stability of soil carbon depends on environmental conditions and land management practices. Permanent crops such as trees are generally considered to sequester carbon in the soil, but there are few reliable datasets on soil carbon stocks and the transfer of carbon during reforestation.

The Soil carbon benefits through reforestation project aimed to determine soil and biomass carbon changes from reforestation across hardwood and softwood, savanna and rainforest ecosystems in subtropical and tropical Australia. The regions sampled included mixed species rainforest plantings in the wet tropics of north Queensland, spotted gum plantings in the Burnett and Scenic Rim regions of south-east Queensland, Pinus plantations in the south-east Queensland coastal lowlands and African mahogany in the Douglas Daly region of the Northern Territory and in Kununurra in Western Australia.

The researchers compared pasture with reforested areas, as well as including three-way comparisons with remnant native vegetation areas where available, in order to quantify changes in soil carbon with land use. They found that soil carbon levels had declined with land-use changes from remnant native vegetation to pasture, and that cultivation caused further declines. 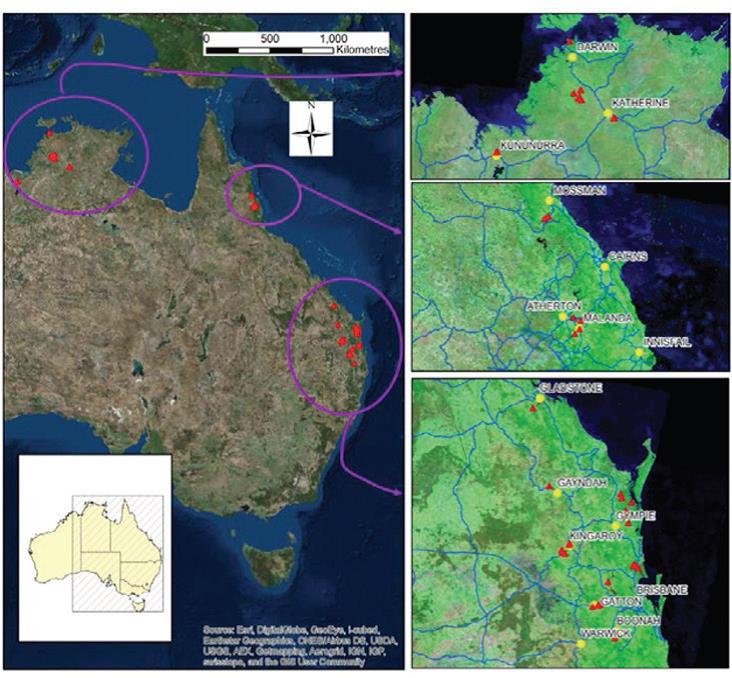 (above) The regions sampled for the project included savanna areas in the NT and in Kununurra in WA, mixed species rainforest plantings in north QLD, spotted gum forest inland from the Burnett region, and pine forest in the coastal lowlands of QLD

In addition to comparing soil carbon changes between reforested areas and previous land uses, the research team conducted sampling intensity studies, with a view to refining soil sampling techniques. It was determined that a minimum of eight plots of 10 bulked soil cores were required to minimise sampling error in variable reforestation sites.

The project also involved an economic analysis of the profitability of reforestation projects. This can help landholders make decisions about reforesting their land and demonstrate the potential of crediting carbon in both the soil and biomass of a forest. This aspect of the project examined species including African mahogany, spotted gum (utilised for multiple building materials), and mixed-species environmental plantings.

The results demonstrated that additional income through carbon credits or alternative sources (such as tourism as found in north Queensland) is required to provide viable returns for hardwood plantations and amenity plantings. High value species such as African mahogany were likely to provide economic returns to the grower.

Based on the current carbon prices and substantial costs, significant land use change to carbon forestry is unlikely. However, there may be financially viable options in other similar ventures without large establishment costs, such as through natural regeneration of forested areas.

This project gives some confidence to policymakers, industry groups and farmers that trees in the landscape can rebuild carbon stocks where they have previously been depleted.

The benefits of reforestation extend beyond economic considerations, however. The strategic incorporation of trees in the landscape benefits agriculture through rehabilitation of degraded land, windbreaks for crops, livestock shelterbelts, buffer zones for watercourses and wildlife corridors. Rather than impeding on agriculture, this all contributes to long-term sustainability.